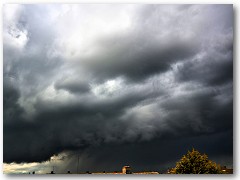 Until a couple weeks ago the summer of 2013 sucked big time. But then we got sunny weather at last. People were longing for a long time for this kind of weather and breathed a sigh of relief when it finally came. The coastal cities, that complained because hotel reservations were very low, now had full house. At work we heard on the radio that this weather was “extremely well”.

Then came the news that we might have a heatwave (5 days of minimum 25 °C and 3 days of minimum 30 °C). I was expecting the worse, for example people taking this heatwave directly after a bad winter and bad spring and a bad start of summer as proof of global warming (or climate change or climate disruption or whatever). To my surprise this was only minimal. Most of the reactions were extremely positive, more like “Hey, we will have a heatwave! How nice!”. I didn’t expect that. In the end we officially got our heatwave on Thursday. Most people seemed to enjoyed it, even longing for more.

After such a period of warm weather, the chance of having a thunderstorm is really high. We got one this morning. First it was cloudy, humid and rather warm. Then the first drops began to fall and from the South-West side it began to get much darker. There were impressive waving clouds and white upwelling clouds. Then lighting started and rain was pouring. After ten minutes the worst part was over. After that still lots of rain. After an hour or so the rain stopped and the sun started to shine again. We had a nice day afterwards.

I don’t want to minimize it. It was a hefty thunderstorm with heavy wind and loads of rain in a very short time frame. So there is a high chance it will create problems somewhere, somehow. But in my lifetime I have been through several thunderstorms before and I was not particularly alarmed by it. But I can imagine that some people would take this thunderstorm as an additional proof that climate change is real and is happening right now. You know. We tend to seek patterns around us. It is all about the mindset. If I would hear day-in-day-out that our climate is changing and we get more extreme weather because of CO2, then this storm could well fit the pattern and it comes natural to add it to the list of proofs of climate change. That is what the mindset is about. Been there, done that.

For example, when Katrina hit New Orleans in 2005, I was still a believer. Before the event I had seen a documentary about New Orleans. In that documentary a scientist explained that hurricanes hit New Orleans on a regularly basis in the past and that they were already overdue for a big one. Yet when later was said that Katrina was an example of global warming in action … I just believed it. Not bothered by this knowledge I believed the statement, because it fitted my beliefs perfectly and therefor ignoring the inconvenient piece of information. If I would still been a believer, I guess I would see this storm as proof of extreme weather. Not because of the data, but because it fitted my beliefs.

It seems inevitable. How long would it take before someone uses this thunderstorm to connect it with extreme weather/global warming/climate disruption? In four, three, two, one…

Sometimes events can make an lasting impression. For example, take at the popular expression: “Where were you when JFK was shot?”. The meaning behind this is that this event shook people so much that it made a lasting impression. This is why they remember exactly where they were and what they were doing at the very moment they heard about the news.

I have to admit, there was only one candle on my proverbial birthday cake when JFK died, so not much of an impression for me on this one. But there were other similar experiences for me and some of them had to do with the global warming theme. For example, there is quite some discussion about whether there was or wasn’t an ice age scare in the 1970s. Was it a real widespread concern at that time? Or just the shrieking of a vocal minority?

I was about 19 years old and was being trained as a lab technician (specialization environmental compounds). We got courses such as chemistry, biology, ecology,… and also a course named “Study of Air, Water and Soil”. Until that time I only was aware of the “Coming Ice Age”, global warming wasn’t raised yet. One day, the lecturer explained some things about climate, more specifically about temperatures. He said that at that time there was a debate over whether the temperatures would go down (because of aerosols) or go up (because of greenhouse gases). I was really surprised, as were my fellow students. This was the first time hearing of a debate about something we thought was settled. I still remember the class room where it happened, in a prefab building, me sitting a the left of the class room, second chair on the second row, the teacher making some schematic drawing with some sun rays on the blackboard (that wasn’t black, but green by the way),… That day my ice age belief was shaken.

Thinking about it afterwards, the fact that I was genuinely surprised about this statement showed that the ice age scare was real for me. Otherwise the statement about the debate wouldn’t have made such an impression. The ice age scare was brought by the media and people (at least in my surrounding) were digging it. It was real, as real as the global warming scare is now. It was a “hot” topic at that time and it gave birth to many scary predictions and wacky solutions. Now they seem crazy, but back in those days they were taken seriously.

Whether there was a scientific, ahem, consensus on the matter, I don’t know and I don’t really care. Yes, I realize that some people try to explain that the issue was not alive with the scientists back then. But hey, it wouldn’t be that difficult either to explain global that warming isn’t an issue with scientists today, just a change the definitions will do (although scientists take global warming for granted, not many really talk about attribution).

Some say the ice age scare was only by a small, but vocal, group of scientists who dominated the media. Could well be. Maybe that is not even that much different than the situation we have now…

When hearing about the “global warming creates cold weather”-ad hoc explanation for our cold winter/spring, it all seemed familiar to me. I definitely heard that before. In the 1970s this was also how the coming Ice Age was explained. For example, this is how Science News brought it in 1975:

The principal weather change likely to accompany the cooling trend is increased variability-alternating extremes of temperature and precipitation in any given area-which would almost certainly lower average crop yields. The cause of this increased variability can best be seen by examining upper atmosphere wind patterns that accompany cooler climate. During warm periods a “zonal circulation” predominates, in which the prevailing westerly winds of the temperate zones are swept over long distances by a few powerful high and low pressure centers. The result is a more evenly distributed pattern of weather, varying relatively little from month to month or season to season. During cooler climatic periods, however, the high-altitude winds are broken up into irregular cells by weaker and more plentiful pressure centers, causing formation of a “meridional circulation” pattern. These small, weak cells may stagnate over vast areas for many months, bringing unseasonably cold weather on one side and unseasonably warm weather on the other. Droughts and floods become more frequent and may alternate season to season, as they did last year in India. Thus, while the hemisphere as a whole is cooler, individual areas may alternately break temperature and precipitation records at both extremes.

What were/are the effects:

These effects are not unusual for a negative phase of the Arctic Oscillation. The Arctic Oscillation was predominantly positive for the 1980s and 1990s, which had an influence on the winters in the Northern Hemisphere. One time or another it was bound to go negative again. So how can one differentiate clearly between the two when the explanation has the same effect as the natural variation? Not to mention the scientists were surprised and had to again rebuild their theory to match the new observations.

The name of the phenomenon “Arctic Oscillation” is not used because at that time the phenomenon didn’t have a name yet. It was given by Wallace and Thompson at the end of the 1990s, who seem to consider it a natural process. In the current explanations of the warm cold, the name is not stated either, probably for other reasons.

This is how they showed it graphically in 1975:

Compare it with current graphics:

So the same process seemed to be used to explain two opposites. In the 1970s to explain it was colder and we might go towards a new ice age. Now to explain global warming is still here and hey, it is getting colder because of “global” warming.

It was at the end of the 1970s. I was around 17, almost finishing high school and preparing for college. Our teacher talked about life, about the economy, about the world outside school. He was quite negative. The economy did really bad at that moment. There had been a crisis at the beginning of the 1970s and at that time there was one again. Youth unemployment was much higher than now. He (and also others) called us the “lost” generation. That statement shook me.

So here we were, young, still studying and in some years going to be released to a world were there was no work for us. We were also told we inherited a world that was polluted by the previous generation, were at the verge of an ice age and worse even, our oil supplies would dry out in less than 50 years. In short, there was not much of a future for us.

Fast forward more than a decade. We had a reunion of our class. Listening to the stories of the others, we realized in the end that we weren’t that bad off. After finishing our studies everyone found a job and none of us was unemployed for long. The pollution also turned out better than expected. Fish were returning to the rivers, air was cleaner than before and there was more green in our environment. The feared ice age seemed to be a non problem after all and the oil supplies were … still about 50 years.

Fast forward to now. We, generation X, gave birth to generation Y and it seems we didn’t learn anything from our own past. I hear more and more the statement that generation Y is a lost generation. Yup, they experience high youth unemployment, we left them with our CO2 in the atmosphere and they will suffer from global warming in the future. Peak oil is just around the corner (but reserves are, you guessed it, still 50 years). In short, there is not much of a future for them. Hey, where did I hear all that before?

The more things change, the more they stay the same. We seem to suffer from collective amnesia. Probably it is just a matter of waiting until the members of generation Y realize that this label was based on nothing much. Then add a decade or so before they declare generation Z a lost generation…