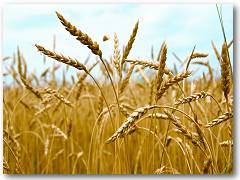 In the VRT news section (in Dutch) I found this topic: the assumed impacts of climate change on Flemish agriculture in 2050. It was about the doctoral dissertation of Eline Vanuytrecht: Crop Responses to Climate Change: Impact on Agricultural Production and the Soil Water Balance in the Flemish Region of Belgium. It basically says that on the one hand the agricultural production could potentially rise (because of the increase in CO2), but on the other hand the stability of the harvest is in great danger (because of droughts in summer and water supplies will come under increased pressure). The latter means harvests will reduce significantly.

The solution was a bit of an anticlimax. After first explaining how bad it all would be, the most plausible solutions seem to be planting our crops earlier in the year (which was admitted farmers already do intuitively), things like planting other varieties and possible irrigation (less plausible due to high cost). It seems adapting to that “great danger” would be rather simple and farmers already are capable of doing this.

Productivity impact studies on Belgian crops had been done before, but this study included also the effects of increasing CO2 concentrations.

This is how the study was done:

All very nice of course, but there is an Achilles heal: the conclusion of the study relies heavily on models (and their underlying assumptions). Not only the crop growth model, but also climate models, which are not well known for their accuracy, nor for their correct results. The study tried to counter this by combining a bunch climate models. Sound a bit strange, the output of climate models offer hypotheses. Combining lots of them is throwing many hypotheses on a pile and calling the result more accurate. Sure, one will see the direction (or not) in which the results go, but if those depend on similar assumptions, then it doesn’t prove much. Feeding the results of models into another model will create even more uncertainties.

To be fair, the many uncertainties of the models are discussed in several places in the dissertation. But in the media this is completely ignored, as expected. The results are treated as the reality 37 years from now, probably even as a further proof of the effects of climate change, but not being said that the results depend on the many ifs and buts of the models used.

How well do these climate models? According to a paper by Hans Van Storch:

However, for the 15-year trend interval corresponding to the latest observation period 1998-2012, only 2% of the 62 CMIP5 and less than 1% of the 189 CMIP3 trend computations are as low as or lower than the observed trend. Applying the standard 5% statistical critical value, we conclude that the model projections are inconsistent with the recent observed global warming over the period 1998- 2012.

This doesn’t necessarily invalidates the models, but it shows there some important processes that are not included and/or some minor things are overemphasized. In the dissertation CMIP3 models are used as General Circulation Models (GCMs). Meaning the temperature increase forecasted by this models would probably way too high and are fed as such into the AquaCrop model.

Now back to reality. The basis of the predicted problems in 2050 are droughts coupled with higher temperatures. After several decades of increasing CO2, is this a trend we see in observational data? MIRA Indicator report 2012 (MIRA is the State of the Environment Report of the Flemish region). What do they say about temperatures and precipitation trends?

Temperature. In our country, we see a incredibly large increase in temperature since the start of the measurements in 1833: 2.3 °C. This is much more than the world average and the average of our neighbor countries. The big question is of course why. Is CO2 working in overdrive in our little country? Of course not. The reason is probably the place where temperatures are measured (Uccle). It is close to the ever expanding city of Brussels. Uccle was a rural village a century ago and underwent a population explosion since then. Although KMI doesn’t acknowledges it, there is a known Urban Heat Island effect. Nevertheless, this station is used in the GISS dataset as a “rural” station.
It got warmer the last century, but one can only speculate by how much.

1 thought on “Do we trust climate models or observations?”