Picture my surprise when I found someone declaring that the Arctic had a record low in the comment section of The Guardian:

Okay, the comment is rather bullying and show a deep lack of respect, but in the end what matters is: is it true? I was surprised to read there was an record low in Arctic. I check the extent regularly and last time I did (somewhere end of last year) nothing really worrisome was seen. If there was a record low, then it should be something rather recent. I looked at the several datasets, but found nothing out of the ordinary. I went back to the thread and looked deeper and found a response on the quote above.

Aha, someone else saw it too and added a link. The link was to the NSIDC site. I already looked at that one and wasn’t aware of a record low in that dataset. As far as I can see, the extent is still within the 2 standard deviations as it has been consistently since more than a year. Contrary to 2012 when the extent took an excursion way south of the 2 standard sigma area.

But this is not the complete story, even not with the generous the low just is noise in the signal (this was probably said because 2011 and 2013 were a bit lower, so technically no record low). There are other things to consider. The January 2-extent is only one point in a year. Take another point and that could change the outcome. More, it is a point that is in one of the least interesting parts of the year. When looking at the values over the year, those from November until March are all very close to each other. Smallest are June and December. If one want to pick just one point in the year, the lowest extent would be a better choice.

More pronounced is in the end of summer (from August until October with a minimum around half of September). The difference in extent between years is much, much bigger. So looking at one specific date in one year alone doesn’t say much. Let’s look at the defense between two years, 2012 (dotted green) and 2013 (solid brown). The black line is the 1981-2010 average. 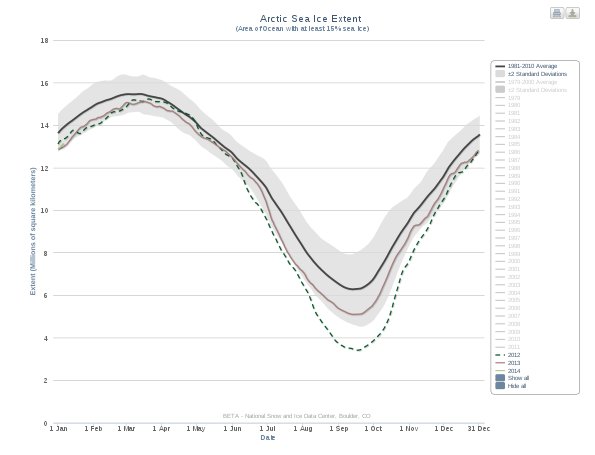 If one would pick the best year between those two, there is no doubt which one that would be. 2013 stayed within the 2 standard deviations all year long, while 2012 was (sometimes far) below that area between half of June and half of November. That paints a different picture than picking just one meaningless point in a year.

Does this mean that extent doesn’t decline? No, if one look at the data from the beginning (1979) there is a obvious decrease in extent, even if you average the years. But we have to see it in perspective. There is more sea ice than in the Arctic alone. Arctic sea ice is at a low, but Antarctic sea ice is at a record high. Together they are above average. This is called the polar see-saw. Only focusing on the Arctic can give cause for alarm. I have seen this before. There seems to be a shift in focus from global to local. From climate to individual weather events. From averages to day records. More cause for alarm.

Then there is the question: how much is known about the natural variation at the poles? There is only 30+ years worth of reliable data. How could be known that the current variation is natural or not? How can it be certain that the decrease is (partly) anthropogenic if we don’t know what the long term variation really is? How can we know that our emissions and more specifically CO2, is the cause?

On the other hand, does the increase over 2012 means this is the long awaited recovery? Maybe. Maybe not. There was some improvement over last years. How it will pan out in the future is an open question, but at least 2013 looked better than was expected. The future will learn. But it is certainly too soon to call it a dead cat bounce either.