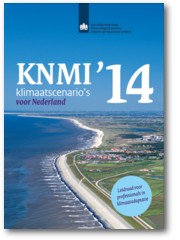 After reading some newspaper articles I got interested in Climate scenarios ’14 for The Netherlands, the new report of KNMI with four mathematical model scenarios for the future climate in the Netherlands. Subtitle is “Guide for professionals in climate adaptation”.

The optimistic look that I got from the media was making place for a more negative one. It is just an accumulation of all things negative. According to the scenarios hardly anything positive will come out of warming or just with a but as a counterweight.

The pause (KNMI calls it euphemistic the “slowed temperature increase”) was touched only briefly. They state that the failure of the models to predict the current standstill doesn’t mean the models are not fit to calculate the future climate. True, but it doesn’t mean it will fit future climate either. This just means the models, right or wrong, can’t be validated by reality until 30 years from now. So how do we know that this long term direction is correct after all if we can’t even check it? How do we know the assumptions it builds on are correct if the models diverge from reality since 20 years already?

If I read it correctly, the KNMI modelers assume this pause is just natural variation that mask our influence. That could well be, but the fact that there is a pause in surface temperatures while having U N P R E C E D E N T E D (and ever increasing) amounts of carbondioxide in the atmosphere, means that there is something not right with this global warming theory. If anthropogenic carbondioxide really is the main cause of the increase of global average temperature and we have unprecedented amounts of it in the atmosphere, then having a pause of a decade and a half doesn’t make much sense. To me it means that there are one or more elements in the system that have an influence at least as strong as the awesome power of carbondioxide and these elements are not really known, so not accounted for in the climate models.

Yet, we blindly base policies on these models. Models that can’t be validated in the near future. Models of a complex and an intrinsic chaotic system. Models that diverge from reality for already more than 20 years now. What are we thinking?

4 thoughts on “You just got to have faith”