Last Friday, we had a (partial) solar eclipse of the sun visible in Belgium. The moon passed before the sun and covered about 80% of it. In the months before this event, there were several articles published in the media that worried that a possible blackout could be possible. Some were afraid that although we survived the energy crisis this winter, yet now we would get the fatal blow that would get our power grid on its knees. Some said we could lose a maximum of 3,000 MW generated electricity from solar installations in our country.

At the end of last year I made a blog post about this and remarked that these doom scenarios would be highly unlikely because of the tiny fraction electricity produced via solar panels in Belgium. I also remarked that 3,000 MW is the total installed capacity, so we would lose only a fraction of that and our grid would have no problem absorbing that.

Now the numbers are available, let’s have a look at it. First let’s look at the general figures of the electricity production in Belgium last Friday:

Total production of electricity in Belgium on March 20, 2015 source: http://www.elia.be/en/grid-data/power-generation/energy-cipu-units

Just try to find a dip in the time frame of the eclipse. The eclipse started around 09:30 AM, had its peak around 10:30 AM and ended around 11:45 AM. Looking at the above figure, it is evidently no dip was visible during that period. To be honest, there is no category called “Solar” in the graph. This because of the tiny share it is in the “Other” category, yet no visual dip was seen in that category either.

There was of course a dip in electricity production, but only when we focus solely on the Solar component it is seen: 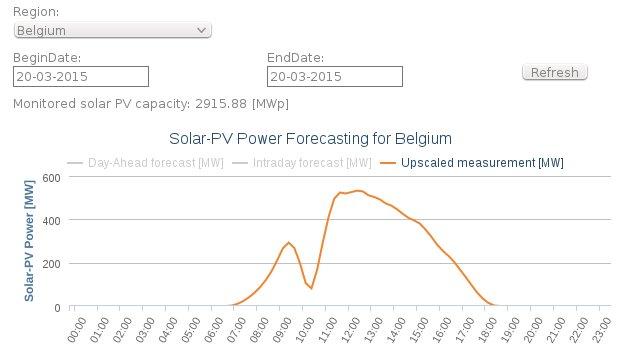 Between 09:30 AM and 11:30 AM there was clearly a dip. The production dropped until 81.06 MW at 10:30 AM. Assuming production increased gradually between that period, production was briefly in the order of 200 – 300 MW below its expected value at the maximum of the event.

How did the grid manager dealt with the situation and absorbed this dip? When looking at the details it seem partly by deploying the “Liquid fuel” fraction, but this share was only tiny (17.3 MW) and was also used to bridge the mid day consumption peak:

The rest was probably done by using the pumped storage at Coo. This installation is used during working days in this time frame anyhow.

So I think it is save to conclude that the impact on the grid was a non-event. It also confirmed that we didn’t lose 3,000 MW by any means, we lost a fraction of that for a very brief moment. My guess is that many were confused by the difference of installed capacity and actual produced power. Or were overestimating the effect of solar energy in our energy mix. Sure, we have an installed capacity of about 3,000 MW, but the actually production is only a fraction of that, even at peak production (a brief moment just after noon).

In our country, the share of solar power is incredibly tiny, so the impact was consequently very low. Clouds did help too. But should we depend on solar and wind power for most of our energy demand, this could be a completely different story. Look at what wind energy did during the day of the eclipse: 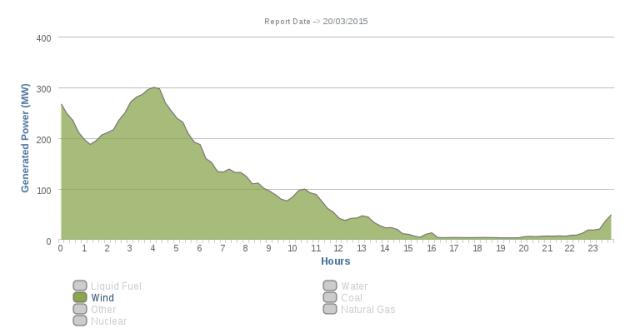 At the time of the eclipse it was already very low (100 MW and below) and decreasing. At a total installed capacity of 1,834,71 MW for wind that is 5%. So a that time wind were underperforming at that time. Or put it otherwise: something else will need to fill in to cope with the demand. The larger the share of intermittent energy, the more difficult the backup (fossil fuel and nuclear) will be.

Imagine that we were dependent on solar and wind power for most of our energy production.

1 thought on “The partial eclipse and electricity production”