A couple days ago I found a link to a news item about how we already feel the effects of global warming in Flanders. Apparently, this is how we, Flemish people, feel global warming already right now (according to the MIRA report):

I could agree with all of those points (although the third one is stated in a very misleading way). If we look at the warmest years since the measurements in Uccle, then we indeed see the last 25 years popping up. That all seasons are getting warming is an obvious result of that. We indeed got more heatwaves now than in the 1970s. There is on average more precipitation since the beginning of the measurements. The average sea level is rising and the wind speed dropped since the 1960s.

If this is true what is not to like? Well, it is brought very one-sided and no context is given. This is a typical example of how information is presented in a way that the public would perceives it as a problem. A problem that doesn’t arise from the facts, but how the facts are presented.

First, these results were not presented as just a warming, but as anthropogenic global warming. Meaning, as by our emissions. Worldwide emission reduction was the main solution proposed by the MIRA report. I agree that the data shows there is an increase in temperatures (at least over the time we are measuring it) and I also have no doubt that CO2 has some influence (it is a greenhouse gas after all). But confidently concluding that this is the main reason when we are dealing with a complex, coupled and chaotic system from which we have only reliable data since a couple decades (for some variables even less) is not really honest. The same with the magical thinking that lowering our emission would bring our “old (assumed steady)” climate back.

Second, for a news service that wants to bring background, insight and context to the news, they surprisingly bring no background, no insight and no context whatsoever. I agree that we measured a 2.4 ° C increase in temperatures in Uccle, but they forgot the mention that a large part of that increase is not climate related, but related to the Heat Island effect. Uccle was a farmer community in the close neighborhood of Brussels that over a century grew into city like proportions (from 4,600 inhabitant in the 1830s to 81,000 in 2015). The MIRA report admits that the Heat Island effect COULD have an influence on the temperature increase in Uccle. That is a strange formulation considering the graphic they used in the MIRA report (year average surface temperature to look for hot spots and which they connect with the heat island effect):

Below on the left the cutout and enlargement of the Brussels area, on the right the orientation of Uccle within the Brussels area (Uccle is number 17). I have drawn two points (common in this map and the map below) and where the temperatures approximately are taken.

Also take a look how close it is to Brussels (for the scale see the 1 km indicator).

This puts the place of temperature measurements at the edge of the red area. Probably in the light red (13.5-14 °C) or in the best case in the orange (13-13.5 °C). Most of the rest of the area is in a light blue (11-11.5 °C). That orange area at the bottom is the forested area at the South-East of Brussels. So if even the temperatures of a forest are measured in the orange area (which have quite higher temperatures than its surroundings), I personally would be inclined to leave out the word “COULD”.

Okay, I agree, that stills leaves us with an increase since the beginning of the measurements in Uccle (1833), but when we look at history we emerged from a cold period from the 1850s. What would one expect other than warming in such a case?

Continuing with the heatwave statement. It is misleading for two reasons. First, there was life before the 1970s. Look at the number of days of heatwaves: 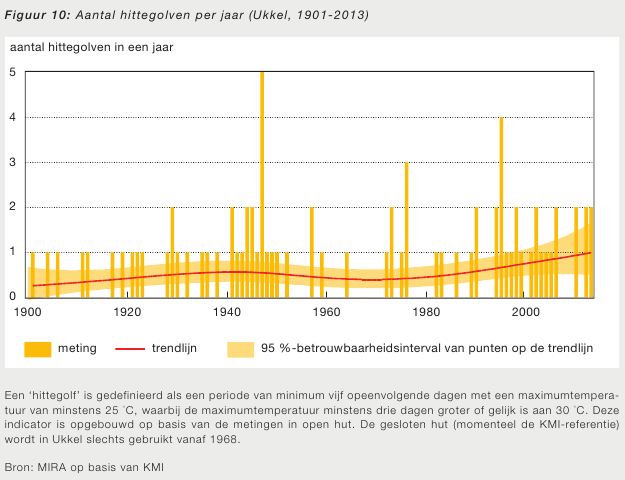 Seems those heatwaves are coming in waves and the 1940s had even more extremes than the current decade. There was on average 1.5 heatwave per year in the 1940s (attributed to natural causes), compared to 1 heatwave on average per year (attributed to CO2)… In the same twisted logic we could as well say that there is a DEcrease in the number of heatwaves compared with the 1940s! 😉

Then the length of the heatwaves. This is how it was shown in the MIRA report:

So, the current heatwaves are not that unusual when comparing with those before the 1970s. Starting from the 1970s makes the current heatwaves more spectacular and unprecedented, which it isn’t the case when we look at all the data. It is the focus on the last cycle that created the perception of something unusual. When looking at the whole picture we see that there was a rather similar cycle of heatwaves before the 1970s, which sheds some doubt on the theory that humans are responsible for the current cycle of heatwaves. Unless there is a good explanation why the heatwaves in the 1940s were natural (they happened before emissions took off), yet this one is on our account.

Second, these temperatures are measured at Uccle … you know, that area in light red/orange with higher temperatures than its surroundings … that evolved from a farmer community to city like proportions … Personally, I would not be surprised if there would be an increase in heatwaves while Uccle and Brussels was growing, amplifying the Heat Island effect over time. 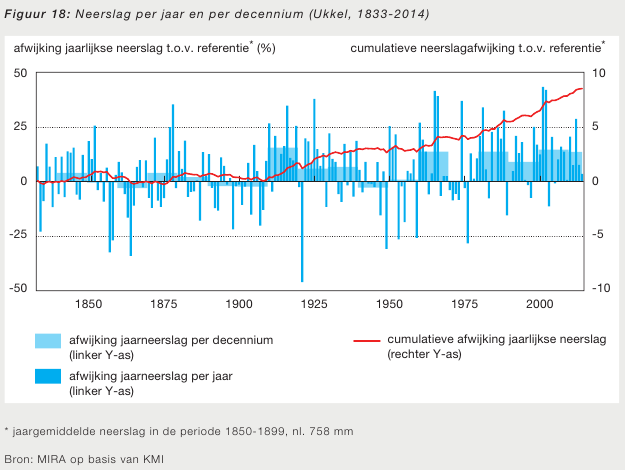 They seemed to use a reference period of 1850 – 1899 and this gives a deviation of almost 50%. I seen the actual measured precipitation data:

Now the deviation is a lot less dramatic, about 12%. So I guess that they probably wanted their report as negative as possible.

Sea level rise is another story. They used the longest time series, the one from Ostend. It has a record since the 1940s, but for some reason data was used since 1951:

The increase of 1.7 mm per year seems rather modest comparing to stations in other countries, but one question popped up: what was the sea level rise before the 1950s? It is a pity that we don’t have any long term sea level measurements in Belgium, but our Southern neighbors do. They are measuring sea level since several centuries for obvious reasons. When looking at the PSMSL data I found the Vlissingen data set that started in 1862. It is just across the border, so very close to our own coast line. 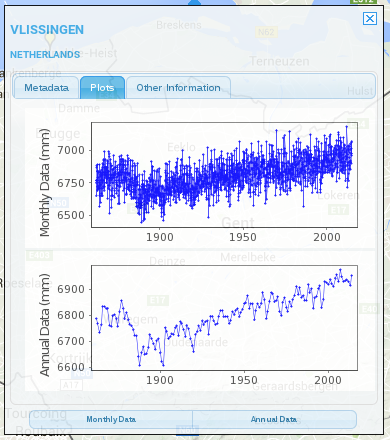 The long term data of Vlissingen showed an increase that started before 1900, which was what I expected. Basically the sea level rise started more than 50 years before we emitted CO2 in significant amounts in the atmosphere. So it is a mystery to me how one could attribute this sea level rise to human emissions, knowing the increase was already going on long before our emissions got significant and it even started to level of at the end, when CO2 is at its highest point. The same in the Vlissingen data, but less impressive.

Finally, the wind speed that decreased by 10 to 15% since the 1960s. Isn’t that ironic? We are told that we need to build more wind mills, yet wind speed is decreasing because of the thing that we want to prevent, but seems to be incapable of. The MIRA report proposes some action we could take to adapt to the consequences of global warming (like water management, city planning,…), but surprisingly, looking for an energy source that is not dependent on a diminishing supply was not one of them. Go figure.