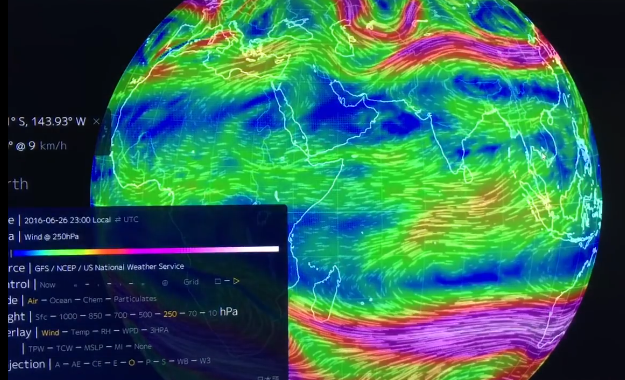 One of the two shallow equatorial flows that were presented as new behavior, even more shallow than the image in the Washington Post article

A couple days ago, Beckwith published a letter that he wrote to Jason Samenow, in which he want to defend his reputation and credibility by having his arguments published in the Washington Post.

There were eleven arguments in total, from which I recognized some that I discussed in previous posts. Like the argument that there was a question mark behind “unprecedented”.

I was however perplexed when I read argument 4 (my emphasis)

4. The image chosen for the article shows some weak cross-equatorial flow, and does not even show the image that I used in the video showing flow normal to the equator, connecting the two hemisphere jet streams. This image in the article is thus very misleading, and poorly chosen for the article. Figure 1 shows an image of the jet streams crossing the equator from my original viral video. On the left we see flow crossing perpendicular to the equator, while on the right we see flow crossing the equator at a shallow angle, more indicative of monsoonal flow. This distinction was completely ignored in the Washington Post article.

Figure 1: Image of jet streams crossing equator in my original viral video. Data is from June 28, 2016 at 20:00 Local time. The Washington Post article did not post this, but posted an image of a basic monsoonal flow.

I was perplexed by this because as far as I could see in the “unprecedented jet stream crosses equator”-video, he himself make no distinction whatsoever between flows that crossed the equator perpendicular or flows that crossed at a shallow angle. I also didn’t hear him tell anything about “monsoonal flows” either. He lumped all the equatorial crossing together as new behavior, indicating that “climate system mayhem is ongoing”.

END_OF_DOCUMENT_TOKEN_TO_BE_REPLACED

After the two videos about the “tearing apart” of the Washington Post article, Beckwith seemed to have found more unusual jet stream behavior and made another video: More Mangled Jet Stream Behaviour.

He first lectured that in theory there are four distinct jet streams, two in each hemisphere, but then he claimed that in practice this is not the case (anymore). That is all nice and well, but a first question would be: do those jet streams behave as theory in the first place? These are all working in a complex, coupled and chaotic system that is our climate system, so I would espect that they wouldn’t necessarily follow the ideal path.

A second question would be whether these jet streams behaved as in the theory in the past? If yes, since when did this behavior changed?

END_OF_DOCUMENT_TOKEN_TO_BE_REPLACED

In the “Unprecedented Jet Stream Crosses Equator”-video Beckwith identified three cros-equatorial jet streams that were assumed new behavior. It was explained as a redistribution of the jet streams because of climate change. One of these crossings was situated over the Pacific, one over Africa and one over Asia. While debunking his critics in a later video, he apparently dismissed two of them as related to the monsoon (the crossings over Africa and Asia). This was the subject of previous post. This post will be about the third crossing that was described as new behavior.

When looking at the ““Unprecedented Jet Stream Crosses Equator” video, I recognize the area he was focusing on: it was in the Pacific Ocean between South-America and East-Asia. An area quite known by those who look into climate data. This became pretty clear when he showed the sea surface temperatures at 04:29:

END_OF_DOCUMENT_TOKEN_TO_BE_REPLACED

Continuing from previous post about the very weak response from Paul Beckwith on the Washington Post article that was critical to his claim that cross-equatorial flows were “new behavior”. Unfortunately there is also a part 2 and it is even worse than part 1.

It starts already at the end of part 1 when Beckwith focused on the atmospheric scientists who disagreed with his claim. Also this time he seemed rather short on arguments. There was only one argument that he seems to tackle and by doing so he diminished the validity of his own claim. In the rest of the piece he just played the man. But let’s first look at what Cliff Mass and Ryan Maue said in the Washington Post article and how these were “countered”:

END_OF_DOCUMENT_TOKEN_TO_BE_REPLACED

In the comments section of the video on the climate emergency there was a reaction from Paul Beckwith in which he said that he would “mercilessly tear apart” the Washington Post article that criticized his claims “in good time”, “limb by limb”:

That seemed promising back then. I was curious how he would counter those arguments.

A couple days ago I looked at his site and found two new posts, from which “Ask Paul, He Knows Everything About Climate” seemed to be the post in which he would “tear apart” that Washington Post article. There were two new videos in which that “tearing apart” was done. This post is about the first video: Ask Paul. He Knows Everything About Climate. part 1. Strange title… No idea what the idea behind this is. Apparently it had something to do with a similar quote by a Canadian Minister.

Watching the video, I was appalled by the very poor reasoning of the Guy-That-Know-Everything-About-Climate in this mercilessly-tearing-apart of the article. At first sight, part 2 seems to be even worse.

END_OF_DOCUMENT_TOKEN_TO_BE_REPLACED

Looking at the story about the cross-equatorial flow and the subsequent declaration of an emergency, I became curious about the Beckwith video that would give more explanation. Watching it was quite an experience. This is what he said after introducing himself:

For many years I have been talking about abrupt climate change and how the climate system is no longer behaving like it used to. We no longer have this stable, predictable system that we had. We gone to a chaotic system. As we transition in a non-linear fashion to a warmer world, we see a complete redistribution of jet streams and ocean currents.

I did’t expect something like that from someone who calls himself a “Climate System” scientist. The climate system, being a complex, coupled, chaotic system, is by its very nature unpredictable. How could he think that it ever was stable and predictable before?

END_OF_DOCUMENT_TOKEN_TO_BE_REPLACED

A couple days ago we were treated on the alarming article in the Science section of a Flemish newspaper titled “Winter is dying”: scientists see worldwide climate crisis (Dutch). Those “scientists” being Robert Scribbler and Paul Beckwith. This is what they saw (translated from Dutch):

Environmental Scientists fear a “global climate crisis” after the jet stream from the northern hemisphere crossed the equator. That would provide unprecedented changes in weather patterns. Global food production is threatened and winter as we know it would be doomed. Not to mention summer.

and further in the article:

“Our climate continues to behave in new and frightening ways. This was never predicted and we have never seen this before. Welcome to climate chaos. We should declare a state of emergency global climate.”

“The food supply will be affected and these changes have the potential to cause major geopolitical unrest. Strange things are happening on our planet.”