Continuing from previous post about the very weak response from Paul Beckwith on the Washington Post article that was critical to his claim that cross-equatorial flows were “new behavior”. Unfortunately there is also a part 2 and it is even worse than part 1.

It starts already at the end of part 1 when Beckwith focused on the atmospheric scientists who disagreed with his claim. Also this time he seemed rather short on arguments. There was only one argument that he seems to tackle and by doing so he diminished the validity of his own claim. In the rest of the piece he just played the man. But let’s first look at what Cliff Mass and Ryan Maue said in the Washington Post article and how these were “countered”:

“This is total nonsense,” said Cliff Mass, a professor of meteorology at the University of Washington. “Flow often crosses the equator.”

Mass added that the cross-equator flow identified by Scribbler and Beckwith is not between mid-latitude jet streams, as claimed. “The analysis is making mistakes that even one of my junior undergrads would not make,” Mass said.

This is how he was countered:

Okay, this is … here we go … Cliff Mass. So here is Cliff Mass, you know. Nice looking mug shot. If you click on … he wrote a book on weather, you know. Click on his presentations, publications … he is a weather guy, he is a meteorologist, okay, this guy has a lot of experience in meteorology.

I was surprised that he criticized Cliff Mass on his photo on the university website. He also didn’t seem to have a high regard for meteorologists. While that meteorologist knew more about the jet stream than he did. Apparently forgetting that a week or so ago he said these flows were new and worrying.

This is the reaction from Beckwith on the argument of Cliff Mass:

That was a weird response for me. Beckwith WAS talking about those crossings being new behavior and as a reaction Cliff Mass and others told the Washington Post that this was total nonsense. Which seems to be correct now. Yet now Beckwith claims that he meant something else by that “new behavior”?!?!

And what is it with this “mostly from monsoon”? As far as I could see in the article, Cliff Mass didn’t mention the monsoon. Even if he was, does Beckwith means that he now believes that there are other crossings than those that are monsoon related? Remember, a week or so ago, the claim was that these flows were something unusual and now he seems to admit that crossings could be part of a monsoon and maybe even because of some other unspecified reasons.

Ryan Maue said the following in the Washington Post:

Ryan Maue, a senior meteorologist with a doctoral degree who works at WeatherBell Analytics, agreed with Mass that the cross-equator flow is totally normal and not evidence of a joint hemispheric jet stream. “Cross-equatorial flow at both upper and lower levels is part of the seasonal transition of the Western Pacific monsoon through boreal summer,” he said.

This is how Beckwith “countered” this in the video:

So continuing from the first part. Euh, Ryan Maue. He says that “cross-equatorial flows is totally normal and not evidence of a joint hemispheric jet stream”. And he talks about it as being a seasonal transition Western … well, from the monsoon.

Of course, we are talking about different things here. Because yes, there is some leakage across the equator when there is a monsoon. You know, in the monsoon the air is heated over the land in summer, so it rises … hot air rises, it creates a void, a vacuum underneath … lower pressure area, so air is pulled in from the ocean, very moist air and it will rise up and forms clouds and precipitation, forming the monsoon and that air can be pulled across the equator. You know, it is very slow, it is widespread in a wide band.

Again, this is said by someone who a couple weeks ago considered that those cross-equatorial flows were something unusual and the equator some kind of a barrier that could not be crossed. To my astonishment he then points around 02:15 to two equatorial crossings that were pointed out as two of the three crossings that were claimed as being that “new” behavior (just over the 3 minutes mark in the “Unprecedented Jet Stream Crosses Equator”-video). Those were also confirmed at 8:06 (Asian crossing) and 08:16 (African crossing) with the scary message that “we lost this separation between the Northern and Southern hemisphere in terms of the jet stream”.

I made some screenshots and have put a red arrow towards the pointer in the video. This is what he currently views as a monsoon related crossing over Africa at 02:14: 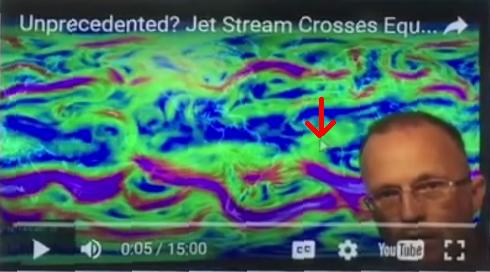 This one is the crossing he pointed at 02:16 over Asia (the crossing is actually mostly behind his head):

Compare that with the three crossings in the “Unprecedented Jet Stream Crosses Equator”-video: 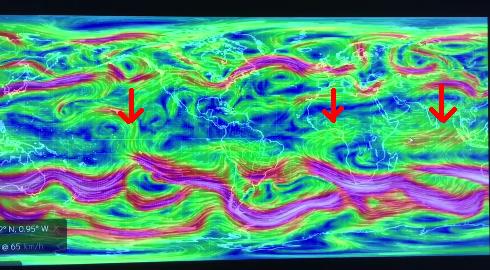 Just by responding to Cliff Mass and Ryan Maue, he blew two of the three crossings regarded as new behavior straight out of the water (that leaves us only one area with an “unusual” equatorial crossing and those who looked somewhat closer to climate data probably will recognize this region and what is happening there…).

He then played the man, not the arguments. Cliff Mass was ridiculed for his picture at his university website and belittled because he was only a weather guy, a meteorologist. Forgetting that those meteorologists observed cross-equatorial flows before and that he was not aware of this only a week or so ago.

Ryan Maue was criticized for things he said about Michio Kaku and Bill Nye. After that, Roy Spencer was dismissed on the basis of just the Google search “skeptical science roy spencer” which gave several pages with hits from (what would you think) the Skeptical Science website and the like, calling Roy Spencer a “misinformer”. Not even a response on what Roy Spencer told about the cross-equatorial flows.

Particularly funny was this statement:

But she says “maybe”, it is not her specialty. So when you ask people, when you ask a specialist anything that they have not specifically studied, you know, they are usually are not willing to give an opinion, but she did in this case.

Which seemed not to apply to himself, knowing that he made strong claims about things that aren’t in his specialty area and even went against the people who know more about it than him. Perhaps he could start saying “maybe” if he is talking outside his area of expertise.

Sam Lillo (who Scribbler referred to, but said that the crossings are not unusual and the unusual behavior was the Quasi-Biennial Oscillation, which is “a separate story”) was dismissed out of hand because:

This is a separate story. Really? A separate story? How could he say this? He is just guessing, right? He doesn’t know. He didn’t study this.

Said the guy who didn’t study it either. Again, no arguments given.

Again, those who hoped to find a “mercilessly tearing apart” of the article on basis of arguments, remained dissatisfied. It went from one logical fallacy to another. The only argument I heard didn’t help his original claim and even agreed mostly with what the meteorologists said in the Washington Post. If he had real counter-arguments, then he clearly wasn’t showing them.