When I was about ten years old, there was an animated cartoon series on television, called “Calimero”. Calimero is a cartoon character, a black chick in a family of yellow chickens. It is a charming, innocent hatchling, still wearing half of its egg shell on its head. In each episode it is getting into situations where it genuinely trying to help, but because of its inexperience and its inability to recognize unwanted situations, it is never coming to a happy end. At the end of each episode it is repeating its mantra: “This is not fair, they are big and I am small”. Calimero is the prototype of an innocent, good-meaning victim in a mean world.

Watching the documentary “Before The Flood”, there was a scene that reminded me of Calimero. It was the scene in which Michael Mann explained his struggles with regard to the hockey stick controversy in an interview taken by DiCaprio. Here is that part of the interview: 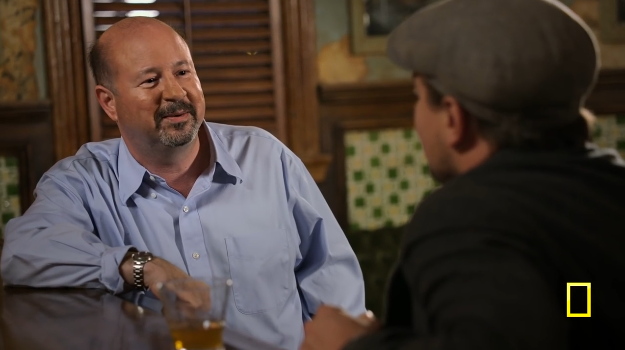 [DiCaprio]
So could you talk a bit about your background, the studies you have done?

[Mann]
I was the classic science and math geek in high school. Studied physics in graduate school, a decade and a half ago. My co-authors and I started to look into climate change in the more distant past. We published a curve, were there is this long term cooling trend and then all the sudden this abrupt warming that has no precedent as far back as you can go. And it got named it the hockey stick because it looked like the blade of a hockey stick. And once we had published that graph I have set myself up for a completely different life.

[DiCaprio]
Why is that? What did they do specifically?

[Mann]
I was vilified on the editorial pages in the Wall Street journal, on Fox news, that I was a fraud.

[Mann]
I was being attacked by congressmen. had death treats, they were actionable enough that the FBI at one point had to come to my office to investigate an envelop that have been sent to me that had a white powder. I had treats made against against my family. These folks know they don’t have to win legitimate scientific debate. They just need to divide the public. And all that hatred and fear is in fact organized and funded by a few players.

Fossil fuel interests, folks like the Koch brothers, finance a very large echo chamber of climate change denialism. They find people with fairly impressive credentials who are willing to send those credentials to fossil fuels interests.

You have all these organizations with lofty sounded names like Americans for prosperity or the Heartland Institute. These are front groups that are funded by corporate interests. Americans for Prosperity is really just a front group for the Koch brothers.

Koch Industries is one of the largest privately held fossil fuel interests in the world and they are doing everything they can to protect that wealth. They have lobbied congress. James Inhofe is probably the most prominent congressional climate change denier. He is the chair of the Senate Environment Committee. It might be not be surprising to learn that James Inhofe is one of the largest recipients of fossil fuel money in the US Senate. Fossil fuel interests has bought our House of Representatives and the Senate Environment Committee. We can’t get a climate bill passed through our Congress because it is controlled by fossil fuel funded climate change deniers who are blocking any bills that would attempt to deal with this problem.

[DiCaprio]
How they are able to discredit scientists who devoted their life to this issue. It is kind of mind boggling to me.

[Mann]
That make me [inaudible]

[DiCaprio]
If I was a scientist, I would be absolutely pissed every single day of my life.

[Mann]
These people are engaging in an effort to lead us astray in the name of short term fossil fuel profits so that we end up leaving behind a degraded planet. What could be more immoral than that?

Okay, I totally get the resentment that DiCaprio (and the viewers) would feel when they hear such a story, but is what Mann told the truth and nothing but the truth???

The story how it is painted is not exactly how I remembered it. The hockey stick controversy happened to be my final straw to become a skeptic and I invested quite some time on this controversy. From what I understood of the controversy, he seems to have “forgotten” some crucial elements in the story.

What I miss in this explanation is … what the hockey stick controversy is actually about. Nowhere did he mention for example Steve McIntire and McKitrick who tried to replicate the hockey stick graph (although this is central to this controversy). He also didn’t mention the long struggle to get this information (that should have been available anyhow), about the failure of accurately documenting the data of the paper, the discrepancy between the published methodology and the methods actually used, the ambiguity over the data sets, the missing parts in the materials & methods, the bristlecone pine series that shouldn’t be used as temperature proxies in the first place, the “mining” for hockey stick figures by incorrect standardization of the PCA method (giving certain shapes over 390 times the weight of others), the “BACKTO_1400-CENSORED” folder that showed Mann et al were aware of the consequences of the incorrect standardization, the red noise simulation that consistently found hockey sticks with the blade at the start of the 20th century, the confirmation by other statisticians (Hubert, Zorita, von Storch, Wegman), the hockey stick graph that in the meanwhile became an icon used for policy purposes and so on and so on.

For those who want to read somewhat more about the hockey stick controversy, there is a very good overview in an article in Natuurwetenschappen & Techniek: Kyoto protocol based on flawed statistics. For those who want a more detailed scientific story go to site of Steve McIntire.

There was a reason why specifically his work became under scrutiny by scientists and politicians alike. Yet he skipped that part altogether. What is left is a Calimero-like story of a math geek, just doing his job and being harassed by evil men who have no problem in destroying the planet for their short term personal gain. You can’t make much more of a caricature than that.

More, by not explaining the reason for the controversy, Mann framed the situation as if he was vilified because of the inconvenient results of his study, which were not liked by those with fossil fuel interests. The science geek viciously attacked for doing his job.

Even more, it is framed as if this vilification is a specific trait of his opponents. How regrettably such vilifications are, it is happening at both sides of the debate. I think it is the result of polarization. It is also happening in other polarized subjects.

The framing of his opponents is interesting: as people who do not want a debate, just agitators who want to divide the public. Therefor painting it as if there was no legitimate debate, forgetting that the real hockey stick controversy was about the statistics. None of that was addressed in this interview while this is crucial to understand the controversy.

I understand that this story, as it is being told, is a very strong narrative and fits the movie perfectly, but it is not exactly a truthful representation of what the controversy was about.

Update
When I reread this post, this claim struck me:

It seems to be framed as he got vilified directly or at least shortly after the publication, confirming his just being an unprepared math geek. That is however not exactly true. The paper of the graph was published in 1998 and McIntire began his queeste only in the Spring of 2003 and the McIntire/McKitrick paper was published years later. In the meanwhile the hockey stick became iconic and was for example prominently presented in the 2001 IPCC report. So “once we had published” should more correctly be “five years after we published”.

6 thoughts on “Calimero on the hockey stick controversy”