From the only-half-of-the-news-will-do department, this newspaper article titled Family from Limburg uses a home battery for one year already: “our house runs on its own power for weeks”. Not only this newspaper, all the other newspapers jumped on the story.

Basically, a family from Kermt (a small village in the Belgian province Limburg) has solar panels on their roof and got themselves a Tesla powerwall (translated from Dutch):

For 42 days since the beginning of September, a family from Limburg has already been using the energy they generate themselves via the home battery. By storing the energy from the solar panels, it can be used when the owners see fit. “So our house runs on its own power,” says Tom Nijsen (39).

At first glance, it sounds really nice. A Tesla powerwall was installed, storing the energy produced by their solar panels and therefor making it possible to use that solar energy, even when the sun doesn’t shine. Reducing their dependence on the grid and for some periods even being self sufficient. What is not to like?

The reason why initially my attention was drawn to this article was because three statements in the title and summary were demonstrably false. You just had to read the article carefully to notice it.

The first thing I noticed was that if the family had 42 days of self sufficiency since in the beginning of September 2016, then it is mathematically impossible that the battery was in use for “already one year” at the end of March 2017. That one was easy to spot by reading the title and the first sentence.

Also, the claims that their house ran fully on the power produced by their solar panels for weeks (in the title) and the similar claim that it did so for the last 42 days (in the summary) are also not true. Further in the article, a graph was shown with the production/consumption of 1.5 – 2 weeks ago and this puts both claims to rest: 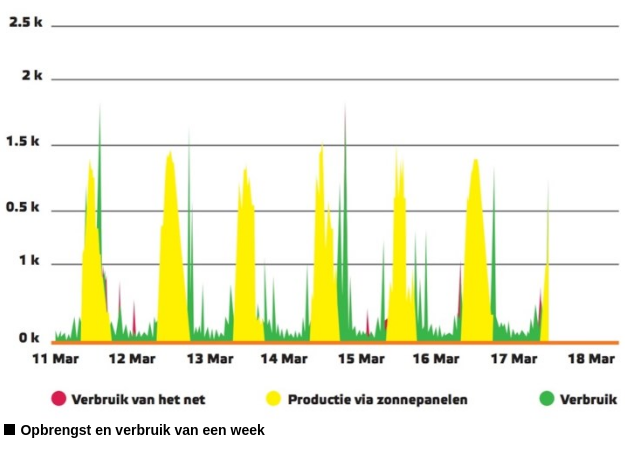 It shows that the installation drew power (albeit very little) from the grid during four out of 6.5 days. If they were really self reliant during a “few weeks” until March 29, then there should not be any consumption from March 15 on.

Those 42 days of self sufficiency were probably not the last 42 days, but in total 42 days somewhere in the period beginning of September until the end of March (probably mostly during autumn and the beginning of spring):

The last few weeks, their house ran fully on its own power for days straight and also on the other days the net was considerably relieved. “Especially now, with a few days of good weather, it is very easy,” said Tom. “The electricity that we generate during the day with the solar panels can be used perfectly during the night and I still have 40-50 percent surplus the next morning.”

In his case, the battery results in 58 percent less activity on the network and more than double direct consumption of self-generated electricity.

This could fit the graph better. There were indeed 2 out of those 6.5 days that no power was drawn from the grid (I would like to see the data during winter).

I count 210 days from the beginning of September 2016 until March 29, 2017 (publication date of the article). The owners could fully rely on the production of their own solar panels during 42 days (20%) in that period. Turning it around: that is 168 days (80%) that they had to draw more or less power from the grid…

This is clearly not an off-grid situation. If they really want to be off-grid, they will have to install at least a second powerwall, making it more difficult to break even.

Which leads to the question: at what cost comes this achievement? The cost of the powerwall was not mentioned in this article, but in other newspapers I read that it came at a cost of about €7,000 euro.

The powerwall is only part of the installation. There is the also cost of the solar panels. The picture of their house shows 12 solar panels. At the website solar panel facts, I learned that such a configuration currently costs around €6,100 euro.

The total cost for new solar panels and the powerwall is therefor €11,100 euro. At first sight, this seems a hefty price to compensate only via a reduced electricity invoice.

As with almost all alternative energy communication, this is only half of the story. That family is by no means off-grid. Their installation is connected to the grid and will draw from the grid as well as put energy on it. Therefor owners of solar panels are honored with a special tax: the prosumer tax (for using the grid in two directions).

In Kermt this prosumer tax for such an installation is currently around €250 per year (and increasing, there was already an increase of 15% from 2016 to 2017). This is a recurrent cost that the owner of the solar panels will have pay each year, so this €625 profit will come down to around €375 per year.

Also, owners of such a system did an investment to get to this €375 profit per year. The life span of solar panels is considered 25 years, but its inverter needs to be replaced (cost of €1,000 – €1,500, let’s take €1,250). The lifespan of the powerwall is considered 15 years. Both lifespans seems rather optimistic to me. I wonder how much electricity will still be produced by the panels at 20+ years and how good the condition of that (lithium-ion) battery is at 10+ years.

With only solar panels and a backwards running meter, the owner would have some profit, but not so much with the addition of a powerwall. But there are other things that will lower the profit.

This €625 profit per year is for an installation with a meter that is running backwards when the installation is putting excess production on the grid. At a later time the solar panel owner can draw electricity from the grid, meaning a 100% return of what was delivered. But in this case the meter isn’t running backwards. Production is fed into the powerwall and appliances draw their power from that powerwall. Batteries aren’t 100% efficient, so this owner’s profit will be less than €625 (2,500 kWh production minus the efficiency factor of the powerwall minus other losses). To get the same amount of electricity, the battery has to be fed with relative more energy. The capacity of the battery will also lower every year.

Even more, their insurance contract will probably rise because of the solar panels on the roof. Also there is a potential impact of the orientation of the building or shadows on the roof from for example trees and so on. These all have an impact on the profit.

For some reason, this side is completely ignored in all articles on this “success story”. Only the positive things are shown, the negative things excluded. This is the sad standard in alternative energy reporting.

People interested in such system will only get half of the information and therefor it will seem like a good idea to follow. People can only take informed decisions when they know both sides of the story.

This is how the article ends:

“The battery must get a central place in the legal framework in order to make it attractive for the owners,” said Christophe Degrez of Eneco. “After all, They relieve the electricity grid, reducing the need for investment. If we want to make Flanders more sustainable, then this device must get used.”

Sure, it is a no-brainer that a power company wants to promote such a scheme. If lots of solar panels owners would install a powerwall, then the power companies could have less problems balancing the grid, especially when it is sunny and there is not much consumption. Therefor reducing the need for investments … because it would be the solar panel owners that will pay for it.