Reading previous post one could remark that a 33% growth in photovoltaics (PV) is already an excellent result and rather close to 50% anyway, so what is the big deal about the IEA inflating a 33% growth to 50%?

I think that none of the two numbers is representative for the impact PV has on energy use, but let me first show the story as it is brought. This is how PV growth looks like according the BP Statistical Review of World Energy 2017:

This looks quite impressive, even when PV grew “only” 33% in the last year. At first glance this seems to be a sign that PV is expanding rapidly. According tot the IEA news story, PV is growing stronger than other energy sources (in installed capacity). Which is mathematically true, but how relevant is it in the bigger picture?

END_OF_DOCUMENT_TOKEN_TO_BE_REPLACED

In line with previous post (on the claim that solar is to surpass nuclear by the end of the year), there is this Bloomberg article titled Solar Grew Faster Than All Other Forms of Power for the First Time. A new IEA report claimed that:

solar powered by photovoltaics, or PVs, grew by 50 percent, with almost half of new plants built in China

There was no link to the report, there was only a link to a Bloomberg page with the company profile of IEA. Searching the IEA website revealed that the article “
Solar PV grew faster than any other fuel in 2016, opening a new era for solar power” was rather similar to the Bloomberg article and reported the same claims. It described this report: Market Report Series: Renewables 2017 – Analysis and Forecasts to 2022.

Unfortunately, the report is paywalled and I will need to reach for my wallet first to get access to it. Which is not something I wanted to do. Luckily, there is the BP data that I used in the last few posts. It also has the photovoltaics installed capacity data. The second part of the claim was easily found. The difference of installed photovoltaic 2015 versus 2016 for China is 34,530 MW. Worldwide difference is 75,093 MW. Meaning roughly 46%. So “almost half of new plants built in China” seems to be confirmed by the BP data.

However, I had some problems confirming the first part of the claim (that “PVs grew by 50%”). According to BP, the worldwide increase of photovoltaics capacity is 33.2%:

That is considerably less than the 50% claimed by the IEA.

That is quite puzzling. I don’t think it is a rounding issue. It is very unlikely that 33.2% (or 0.332) is rounded to 50% (or 0.5). So I assumed that the IEA data is rather different from the BP data and since I no access to that data, I initially forgot about it.

END_OF_DOCUMENT_TOKEN_TO_BE_REPLACED

The tweet linked to the slightly more nuanced article “Solar energy will surpass nuclear by the end of the year” and the included summary gives a glimpse of what is really meant by “solar that surpasses nuclear” (my emphasis):

END_OF_DOCUMENT_TOKEN_TO_BE_REPLACED

Stumbled upon this tweet of Damien Ernst on solar energy:

The map that shows that if Europe can quit fossil fuels thanks to solar energy, then the US can do it too. #ParisAgreement

That map shows the sunshine hours in Europe compared to the United States and it is clear that the Americans enjoy more sunshine hours than the Europeans. I live in a region with an frisky blue color (1200 – 1600 hours) and, looking at the institute that the twitterer works for, he is living in this region too.

I understand that this statement is conditional. If Europe can quit fossil fuels thanks to solar energy, then according to this map, the US could do it too. Could even do it much easier.

So far so good.

The big question that is burning on my lips: can Europe actually/eventually quit fossil fuels thanks to solar energy?

END_OF_DOCUMENT_TOKEN_TO_BE_REPLACED 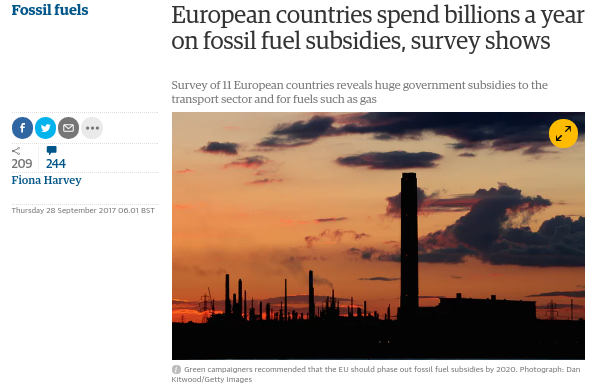 Eleven European countries were surveyed and it was found that those subsidies totalled to a huge number (my emphasis):

Who those “green campaigners” are is not really clear from the article. There is no link to their survey either. All the links in the article go to other Guardian articles. It is not really clear how these campaigners surveyed those countries or what their methodology was. What is known are the surveyed countries: the Czech Republic, France, Germany, Greece, Hungary, Italy, the Netherlands, Poland, Spain, Sweden and the UK.

Let’s start with the break-down of the fossil-fuels subsidies of those countries as reported by the Guardian journalist.