In previous posts, I several times made the remark that installed capacity is not a good measure to define the success of solar and wind energy. Those remarks were the reaction on the claims of Blakers and Stocks that solar PV and wind energy are “growing exponentially”, that they are “on the path of dominance” when it comes to new capacity and that they “are on track to entirely supplant fossil fuels worldwide within two decades”. The authors also claimed that other low-carbon energy sources would only play a minor supporting role.

END_OF_DOCUMENT_TOKEN_TO_BE_REPLACED

A graph that caught my attention in the “100% renewable electricity in Australia” paper by Blakers and Stocks was this one: 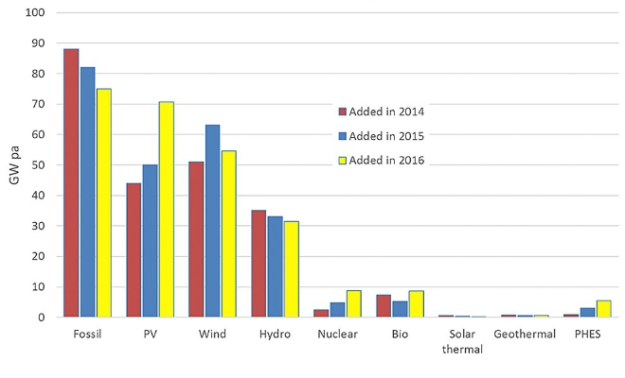 It shows growth of the installed capacity of solar PV and wind compared with other energy sources between 2014 and 2016. The remarkable increase of solar energy stood out, it almost doubled in three years time. Wind energy did not do bad either, the increase grew in 2015, dropped a bit in 2016, but nevertheless stayed above the 2014 value.

There is something weird about this graph: there is also an entry “nuclear” and, as far as I know, Australia doesn’t have any nuclear power plants. So this is obviously not the Australian situation.

The relevance of the graph was explained in the paper as (my emphasis):

That PV and wind constitute half of the new generation capacity is rather meaningless since they are comparing intermittent energy sources with dispatchable energy sources. But let’s assume, for the sake of the argument, that this comparison is somehow meaningful. What they apparently want to say is that the installed capacity of solar PV and wind did very well compared to other power sources worldwide (which explains the “nuclear” entry) and that solar PV and wind in Australia were responsible for nearly all of the growth. Therefor suggesting that there is a similar increase for Australia, only much better since solar PV and wind provided most of the new installations there.

END_OF_DOCUMENT_TOKEN_TO_BE_REPLACED

It is not unusual in alternative energy communication to ignore or minimize its negative sides. This is no different in the Conversation article on solar PV and wind being on track of replacing fossil-fuels within two decades as discussed in the last two posts. Halfway the article there is the only admission that there might be a negative side to solar PV and wind energy:

A renewable grid
PV and wind are often described as “intermittent” energy sources.

When I read this the first time, I had high hopes that real issues would be tackled. That hope was in vein, it was followed by this sentence in full cheering mode:

But stabilising the grid is relatively straightforward, with the help of storage and high-voltage interconnectors to smooth out local weather effects.

END_OF_DOCUMENT_TOKEN_TO_BE_REPLACED

While writing previous post, I got intrigued by the graph representing the electricity generation forecast until 2032, especially that yellow line representing the exponential growth of solar PV and wind. To recapitulate, this is the graph I am talking about: 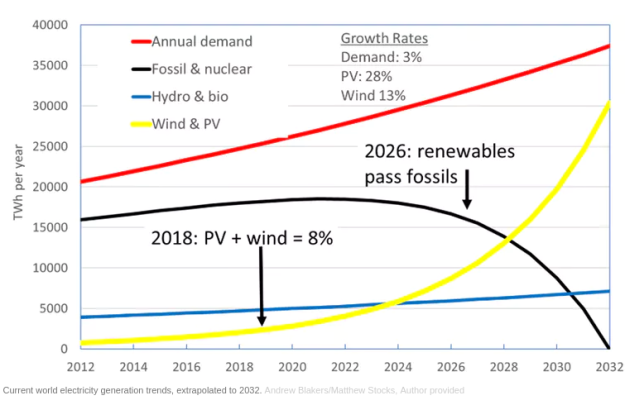 The authors claim that this graph represents:

They also state that the growth rate of solar PV was 28% and that of wind was 13% between 2012 and 2016. The yellow line, being a combination of solar PV and wind, will be somewhere between those two values.

The suggestion is that this growth of solar PV and wind is somehow established between 2012 and 2016, therefor could be used to extrapolate future values that give rise to that exponentially increasing yellow graph line. I wondered whether such trend really could been found between 2012 and 2016, so I looked at the values of electricity generation that I used for previous post: