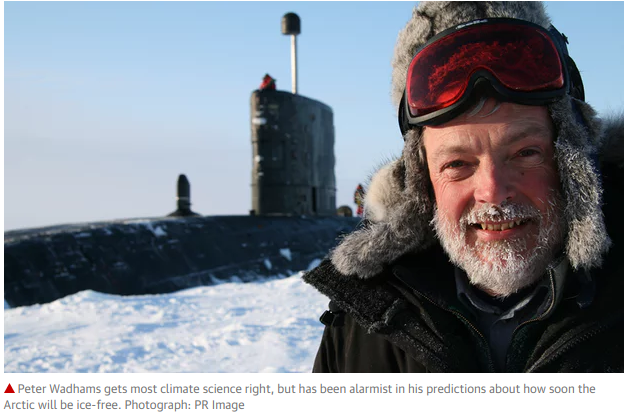 At the beginning of this week, I had my coffee-almost-spoiled-my-keyboard moment when I read a The Guardian article titled “There are genuine climate alarmists, but they’re not in the same league as deniers“. There were some surprising claims in this article and while writing this post, it became rather long, so I will split this into separate posts.

This first post will be about the main subject of the article. The author, Dana Nuticelli, explains that the skepticalscience site has a page about climate misinformers. Currently, all those misinformers are “deniers”, but Dana claims there are also “genuine climate alarmists” who spread misinformation. Those climate scientists are not in the list, their (failed) arguments are not debunked, yet part of a “constant deluge of climate myths”.

That is interesting to hear coming from this source.

Two examples of such “genuine climate alarmists” are provided in the article. The first is Guy McPherson. I have not heard of him before. He apparently claimed that climate change would likely drive humans to extinction by 2030. Dana explains that being already halfway and looking at the current human population, it will be rather unlikely that the human race is going extinct in the next couple decades. Okay, I can understand that this is a alarmist claim.

The other example is Peter Wadhams. I heard of him before and even wrote some posts mentioning him here, here, here and here. According to the article, Wadhams predicted in 2012 an ice-free Arctic by 2016, which didn’t happen when 2016 came along.

The claim that Wadhams “gets most climate science right, but has been alarmist in his prediction about how soon the Arctic will be ice-free”, is a bit strange to me. Wadhams is an expert in his field and those predictions were made from his understanding of the science, but were horribly wrong in retrospect. If we assume science makes testable predictions, then there obviously has to be something wrong with Wadhams’ original assumption(s). Otherwise there would have been an ice-free Arctic in 2008-2009 or 2015-2016-2017.

It is all nice and well to claim that Wadhams previous predictions are not in line with the science, but back in 2012 and 2013 when the predictions could not be proven right or wrong yet, skepticalscience was very happy to report on these now called “alarmist” claims as if these were valid, without mentioning that these were over the top or not in line with the science.

For example, in the September 2012 skepticalscience article Do we know when the Arctic will be sea ice-free? the Wadhams’ projection is mentioned (it was even called a “prediction”, not the projection that it most probably is) (my emphasis):

Predictions are once again being made about when the Arctic Ocean might be ice-free in summer. There’s quite a range of opinions. For example, Professor Peter Wadhams, ocean physicist at the University of Cambridge, tells the Scotsman:

Then follow some other sources that predicted/projected/suggested an ice-free Arctic in “this decade” or in the “next decades”. The article ends with (my emphasis):

Overall, this Reuters headline probably offers the best summary of the state of scientific opinion:

No attempts were made to clarify that the Wadhams’ claim is alarmist and is misinformation. On the contrary, his “prediction” is presented as a valid possibility at the time.

Something similar in the 2013 SkS Weekly News Roundup #6 linking to a post about this projection (my emphasis):

The Arctic may seem like a distant place, just as the most extreme consequences of our wasteful use of fossil fuels may appear to be in some distant future. Both are closer than most of us realize.

The Arctic is a focal point for some of the most profound impacts of climate change. One of the world’s top ice experts, Peter Wadhams of Cambridge University, calls the situation a “global disaster,” suggesting ice is disappearing faster than predicted and could be gone within as few as four years.

Basically, when the projection could not be tested against reality, this claim was used to confirm the severity of the situation, yet, after being caught up by reality, is now conveniently dismissed as “misinformation”.