Hopefully it is not getting boring by now, this is another post on the meaningless metric of contribution of solar and wind. For those who have had enough of it, some reassurance, it will probably be the last on this subject and I will keep it as short as possible.

In this post, I am going to mine for an inconvenient example again. There are other energy sources in Belgium than solar and wind. The most interesting is nuclear. Half of our electricity comes is produced by nuclear power plants. If we do the same as solar and wind (look for record contribution), then this might get us some interesting numbers. Since total load varies throughout the day/the week/the seasons, we are bound to to find some high numbers, maybe even really high numbers.

And yes, when I calculated the contribution of nuclear in the period September 2017 – July 2018, the record value was …

Eighty five percent? Where were the Minister and Elia on September 11, 2017? I also didn’t hear anything on the news either. If we have to cheer for the 45% contribution of solar PLUS wind, why was there not a peep about a 85% contribution of nuclear, all on its own?

END_OF_DOCUMENT_TOKEN_TO_BE_REPLACED

Can’t get enough of the (meaningless) metric of record contribution of solar and wind to total load. This time, I will go hunting for another such record myself, using the exact same data that leads to that cheered record.

Remember from previous posts that the claim was made that Belgian solar and wind contributed 45% of total load on July 28 and that it was brought as something significant. Also remember that July 28, 2018 is a Saturday and that there was coincidentally a lot of solar PV and wind energy production, leading to a big contribution of solar and wind to total load. When it comes to intermittent power sources, that record is basically meaningless.

There was also this graph from Elia (our network manager) that showed other similar records of the last 11 months (see also this post):

As I explained in my first post on the subject, it suggests a steady increase. Until you realize that these are spot counts of coincidental high values, it is no less than cherry picking.

But if our Minister (and the network manager) are allowed to cherry pick, so am I! Solar and wind are intermittent energy sources and the record values are directly related to the failure to follow demand by those sources. Therefor, if there are records of maximum contribution (low demand at times of high production), then there are also records of MINIMUM contribution (huge demand at times of low production).

END_OF_DOCUMENT_TOKEN_TO_BE_REPLACED

The previous post focused on the contribution-of-solar-and-wind-to-total-load metric as used by our Flemish Minister of Energy. In short, there was a lot of electricity production by solar and wind on a Saturday afternoon (when electricity consumption is traditionally low) leading to a 45% contribution by those two power sources to total load. This was praised as a “new record”. We can’t control the sun nor the wind and consumption of electricity follows certain patterns, so some pretty high contribution values are bound to happen, making it a rather meaningless metric.

He also used other equally meaningless metrics in te past. At the beginning of the year, he surprised us all with the MWh-per-km2 metric. According to this metric the Belgians are among the best in “Europe” when it comes to solar and wind energy! We are in the top 3 when it comes to production of solar energy per km2 and in the top 4 when it comes to production of wind energy per km2.
The problem with this metric is that it is mining for small countries with a high population density like, well, Belgium. If one want to classify countries by their population density, then this is most definitely a wonderful metric, but that is probably not what he was trying to do.

END_OF_DOCUMENT_TOKEN_TO_BE_REPLACED

“A new record for solar and wind”. This is stated in a tweet by our Flemish Minister of Energy: 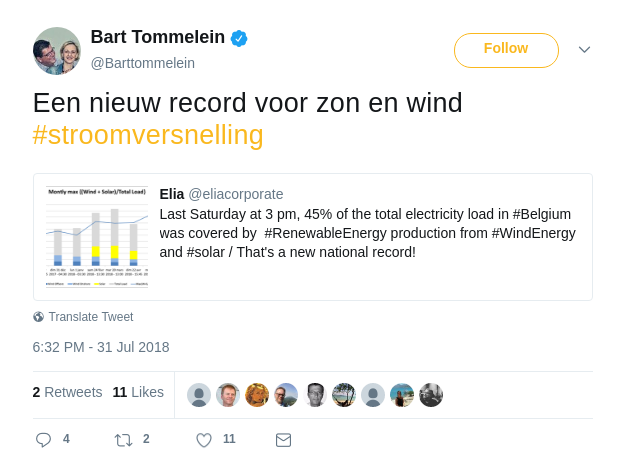 The hashtag “stroomversnelling” (the Dutch word for “rapids” and used in expressions it roughly means “speeding up” or “moving faster”) and he often uses it in relation to his policies. So, do I understand it correctly that he connects the current policies are the reason that this record was broken?

That “new record” was solar and wind producing 45% of the Belgian electricity load on Saturday July 28 at 15:00. My first reaction was: “So what?”. It probably would boil down to a few minutes in the weekend. The Minister has a history of unnuanced and misleading tweets, so I thought it would be a good idea to check what that record is all about. I turns out that this record was even less significant than I expected.