This is how the onehundredmonths.org campaign page looked like in its heyday: 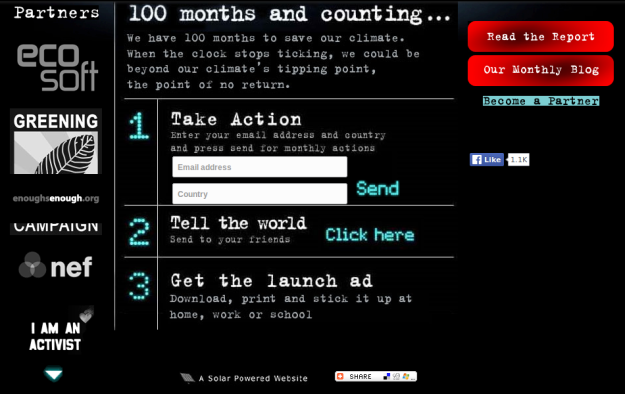 The button “Read the report” goes to the New Economics Foundation where you can download the 100 months – Technical note document that explained the urgency (my emphasis):

O M G, they made a calculation!

It states that according to the CO2 emissions at the time when the document was created, “atmospheric concentrations of greenhouse gases will begin to exceed a point whereby it is no longer likely we will be able to avert potentially irreversible climate change”.

Aaaaaarrrrrrghhhhh. We are already 21 months overdue!?!?

The man behind the onehundredmonths-campaign is Andrew Simms. He has a Guardian blog: 100 months to save the world. This blog starts with the post The final countdown, published on August 1, 2008 at exactly 00.01 BST. In that post, it was explained that “time is fast running out to stop irreversible climate change”, we “have only 100 months to avoid disaster” and “we could reach a tipping point for the beginnings of runaway climate change”.

Okay, that was in 2008, but what happened in the meanwhile? We could as well averted that danger in those 100 months, no? Didn’t we have that wonderful Paris Agreement in December 2015 that saved the world? Well, no. If we walk the path of the Paris Agreement, then we are in for more than THREE degrees warming by 2100!

More than three degrees?!?! That is well above the 2 °C limit proposed by the onehundredmonths-campaign.

Then over to the “100 months”-directory at the New Economic Foundation, the same place where also the Technical note resided. Maybe some explanation would be available there. This is what happens when I go to that page:

Ooops. Gone. I start to spot a pattern here.

Simms also has a Twitter account. Me, blessed with an evil mind, went looking for posts specifically at the end of November 2016 and beginning December 2016. There are posts on Brexit, Trump, the Austrian politics, the Amazon rain forest, energy and so on. But for some reason not a peep about that deadline that passed.

A leopard doesn’t change its spots. When I went back to that “100 months to save the world” Guardian blog, I noticed that the last post was dated December 22, 2016. Just after that supposed tipping point was passed. The post is titled What can a medieval climate crisis teach us about modern-day warming? It is a rather confusing read. The onehundredmonths-campaign is also mentioned:

The next in this particular series of articles will be the last. It began 100 months ago with the objective of charting action in a crucial period to address potentially catastrophic climate change.

Then the moment supreme:

Back then, we proposed that with conservative estimates, this was the period of time before it was no longer “likely” that we would stay below a temperature rise of 2C. For the last of the series I will be asking a range of people what our chances are now, and what it will take to stay the right side of that line, and go further to meet the Paris commitment of keeping to a maximum 1.5C rise.

Huh? He proposes a new goal post (1.5 °C) and glosses over the fact that his old goal post (2 °C) wasn’t reached yet. Wasn’t there a deadline that was crossed at the actual moment he published these words? According to his original post that he linked to, we should stay below 2°C to avoid disaster/tipping point/runaway climate change and this is obviously not the case. So shifting the goal post to 1.5 °C is a meaningless move, yet a brilliant diversion. It suggests that a 2 °C rise is averted and we could now evolve to a 1.5 °C rise. He would be a good politician.

Maybe he didn’t know that we the current Paris agreement isn’t going to limit to 2 °C, let alone 1.5 °C? Not so, he has a new booklet/pamphlet ready (article published July 2018): How did we do that? The possibility of a rapid transition. It is a collection of inspirational stories of how we did transitions in the past, so we can do that now too.

Here he explains the Paris Agreement in detail (my emphasis):

The latest international agreement on climate change signed in Paris in 2015 proved far more ambitious than many had expected, aiming to hold global warming to 1.5°C above preindustrial levels, and at least “well below 2°C”. But even 2°C requires emissions reductions well beyond what many climate scientists, economists, NGOs and commentators believe is likely on current trends, or judge as economically viable. Current national pledges leave us on course for warming of up to 3.4°C, according to the United Nations Environment Programme (UNEP), and only then if fully delivered. UNEP says they ‘will reduce emissions by no more than a third of the levels required by 2030 to avert disaster’.

Yet another deadline for avoiding disaster. But most importantly, he definitely knows that limiting to a 2 °C rise is currently not feasible (not even close). He also should realize that these hundred months are over (already 20 months at the moment he proposes the booklet/pamphlet), but somehow he seems to fail to reach a conclusion from that.

Now what are the consequences if we don’t do that rapid transition (my emphasis):

It points to the need for uncommon actions, transformation and rapid transition. Not just in response to the threat of climate change, but to other, often closely related, crises in food systems, forest and marine ecosystems and stresses to water and biodiversity that further imperil us.

7 thoughts on “We are doomed!”