Another thing that I wanted to write about in the solar-and-wind-will-green-the desert story is the region that was modeled by the researchers. I understood from the BBC article that the researchers distinguished two regions: the Sahara and the Sahel. Which puzzled me at the time. These are two distinct regions. The Sahara is a desert, while the Sahel is a transitional zone between the Sahara Desert to the north and the more humid savanna belt to the south.

It is not very clear from the BBC article what the exact relationship is between the two in that paper. For example this statement (my emphasis):

“Our model results show that large-scale solar and wind farms in the Sahara would more than double the precipitation, especially in the Sahel, where the magnitude of rainfall increase is between 20mm and 500mm per year,” said Dr Yan Li, the lead author of the paper from the University of Illinois, US.

That is rather confusing. The title is “Large-scale wind and solar power ‘could green the Sahara'”, but this quote seems to suggest that the large-scale installation in the Sahara would have the most effect in the Sahel, which seems to contradict the title since the biggest effect is not in the Sahara, but in a nearby region of the Sahara.

There was however a graph in the BBC article that contained some numbers that I could use to shed some light on the issue. Let’s go back to that graph: 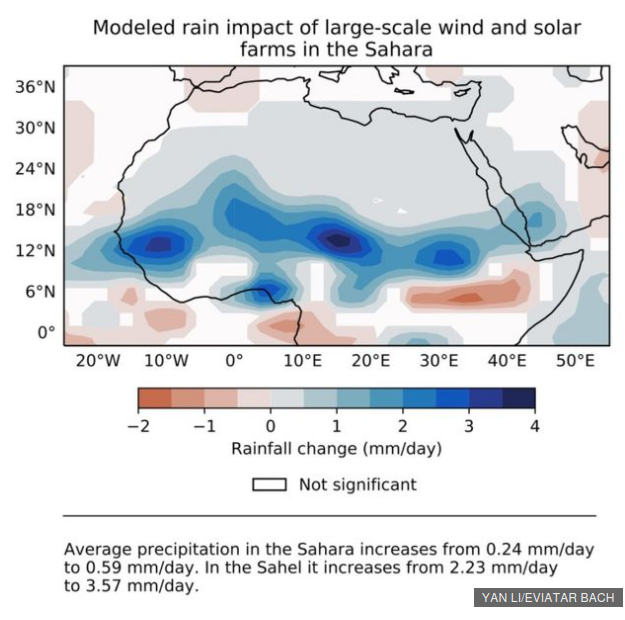 The precipitation of 0.24 mm/day in the Sahara translate to almost 88 mm/year. Which is indeed very dry and is well within the range of being a desert. The Sahel numbers show something different. A 2.23 mm/day value translates into almost 814 mm/year …

Time to go to the source and read that paper in order to find out what the authors actually did. I had quite some questions. Where are the solar panels and windmills situated? Is it only the Sahara or also in the Sahel? And what is the modeled timeframe?

The title suggests that the solar and wind power facilities are located in the Sahara and leaves it open where the effect takes place:

In the first text-box titled “More energy, more rain”, it is claimed that (my emphasis):

[…] the installation of large-scale wind and solar power generation facilities in the Sahara could cause more local rainfall, particularly in the neighboring Sahel region

Which is about the same claim as was showed in the BBC article. If these facilities are situated in the Sahara desert and have the most effect in the Sahel, then to me that doesn’t sound very “local” to me… The researcher however had this (re)definition of “local” (my emphasis):

Figure 1 contains, among others, this graph showing the locations of the solar and wind power facilities in their model:

That is the Sahara alright, but there are also some facilities in the Arabian desert… I however understand from the Supplementary Materials that the installation would be located only in the Sahara desert:

Here the authors estimate the amount of energy generated by wind and solar in the Sahara. They start explaining that the Sahara is 9.2 million km2 (which is indeed the case) and then calculate how much power could be generated from this area. Apparently they covered the entire Sahara desert with solar panels and windmills! Not just 9 million km2 as was claimed in the BBC article, but the complete area and if we can believe figure 1, also part of the Arabian desert. How could that be? If the Sahara is 9.2 million km2 and they filled it with 9.2 million km2, then what about these facilities in another desert?

However, none of these sources made clear what the timeframe of the model run was.

Reading the Supplementary Materials, I found that the researchers ran the model over the period of 100 years (tuned to the SST from 1901 → 2000) and used the last 50 years for their analysis. So a wild guess from my side is that the University of Maryland graph (showed in the BBC article) spans the complete 100 years run and the graph in the paper spans the last 50 years of the model run. There was a feedback loop build into the model, so the last 50 year will see the largest part of the increase. This could explain the minimal impact on the precipitation range (+1 mm).

I also found table S1 on page 7 of the Supplementary Materials (averaged precipitation changes of the Sahara versus the Sahel) that confirmed the numbers on the University of Maryland graph:

Interestingly, it also defined the area they used in the model run for the Sahel region (the rectangle land area between 10N to 20N and 20W to 30E). At that point, I already encountered the definition of the modeled area of the Sahara on page 3:

I am not familiar with longitude and latitude values in Africa, so I thought it might be a good idea to visualize those two rectangles on their own graph. It looks like this (brown rectangle is the modeled Sahara, green rectangle the modeled Sahel):

Also the modeled Sahel region is different from the actual Sahel region: the real Sahel is a small wavy band beneath the real Sahara and it stretches from the Atlantic Ocean in the west to the Red Sea in the east, that is the entire length of North-Africa. Yet in the model it only spans 3/4 of the length of Africa and it is much wider. Also strange to see that, in their model, most of the Sahel is part of the region they define as the “Sahara”… Conveniently, only the area with the biggest precipitation increase in the Sahel is situated outside the “Sahara”.

To compare: this is how the Sahara and the Sahel look like in the real world:

Their modeled Sahara is not exactly the region we know as the “Sahara”… When the researchers mention “the Sahara”, then they mean something else than what the readers would think it mean. If I understand it correctly, they redefined the “Sahara” as the regions with a precipitation less than 250 mm/year as part of a larger land area, not the area in the Northern part of Africa that bears that name. It now includes areas that are not part of the Sahara and excludes some areas that are.

The same is true for the region we know as the “Sahel”. In the model, it is now redefined as a shorter and wider band than it is in reality.

Now back to the beginning of this post which started with the BBC article “Large-scale wind and solar power ‘could green the Sahara'”. After reading the paper, the Supplementary Materials and the UMD news message, I found that the authors of the paper didn’t mentioned “greening” of the Sahara, so if they based themselves on the paper, the Supplementary Materials or the UMD news message, then this statement comes from the fantasy of the journalist. Or maybe the journalist used another source?

I think it is not very surprising that the BBC came to such a conclusion here. The researchers redefined the terms “Sahara”, “Sahel” and “local” in such a way that, for those not familiar with the situation or with the model, it will be difficult to understand what the authors actually said. Allowing for articles with catchy, but misleading, maybe even wrong, titles.