A storm headed over our country at the end of last week. That inevitably means advocates of wind energy praising how wonderful wind energy is doing and how much electricity was produced by wind. That is exactly what happened and apparently we even have a new record…

It was Chris Derde (manager of energy provider Wase wind) who broke the news. He tweeted that wind energy had a “new record production of 3 GW” and that nuclear power plants lowered “their production by 0.5 GW”. This was one of the two images that accompanied the tweet, illustrating the record:

It was not really clear from the screenshot, but looking at the Elia website I found confirmation that electricity production from wind energy almost reached 3 GWh around midnight and was projected to stay close to that value until noon. That is impressive, considering that the previous records had a timespan of (less than) 15 minutes, but nevertheless this is still an exceptional situation.

He also mentioned later in a comment what his motive was to tweet about the record (translated from Dutch):

At the time of the message, a 3 GW wind power capacity was operational. New wind turbines are added regularly; when there is a lot of wind and wind turbines produce at full capacity, it is a new production record.

Of course it is. Capacity is indeed gradually increasing and more capacity will generate more electricity. When it is very windy, like in a storm, records will be broken, no doubt about that. But I fail to see why this is so important in the workings of our current grid.

Here is an overview of a couple days before the record (from the Elia website (I added some arrows to highlight some interesting values): 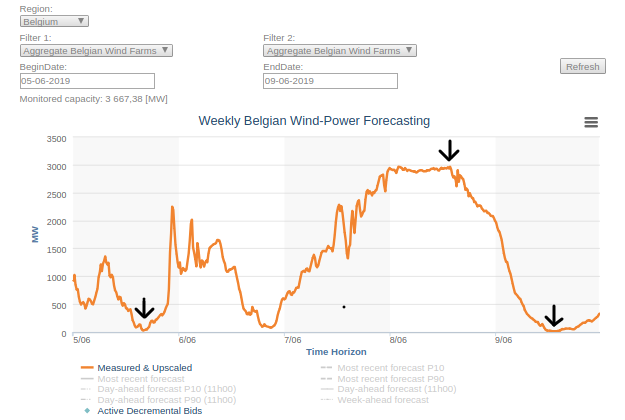 If we look at the last two arrows, then production ranged between 0.52% and 81% within 12 hours. That is less joyful, that is even a bit scary because this distance will get larger when capacity increases.

There are two things playing here:

Even multiplying by an insanely high number will not help much (in theory, it would need 441 times the current capacity to satisfy the demand on that day at that time).

At peak production, trouble is looming. There was a production of 2,966.83 MWh on June 8 at 13:45. Doubling the capacity would get 5,933.66 MWh, which is already somewhat below the demand at that moment. Tripling would result in 8,900.49 MWh, which is higher than the demand of that moment. Multiplying by double digit numbers would probably fry the grid.

This is the situation when doubling and tripling the current production:

At peak production, there is a rapid increase that will reach the value of demand (8,737.68 MWh) before even tripling the current capacity (3,667.38 MW). At low production, the double and even triple values are virtually indistinguishable from the base line.

Zooming in on the last day would make the difference clear. Look carefully below right (the gradation is even exaggerated, I used the smallest white space possible, but at this magnification there is in fact no distinction between the three tick marks):

That is the part of the story that doesn’t get told. Only record highs are proclaimed. Because the capacity increases on a regular basis, we are bound to hear many of these records over time and this could give the false impression of a steady progress. The ever increasing distance between highs and lows tell us a different, less optimistic, story and points to challenges that lie ahead.