In previous post, I described the particular dynamics in which electricity production from intermittent energy sources, when growing in capacity, will not increase much at the production valleys, but will steeply increase at the production peaks. This means that, when capacity increases, the needed backup capacity will stay high, even at multiples of the current capacity, but at the same time measures have to be taken to suppress the ever growing peaks.

That made me wonder how this interaction would look like when capacity of solar and wind increases over time. In real-life, this is not witnessed yet, this is still to come. It is however possible to study the dynamics of such a system by modeling it.

As I already mentioned several times, I have no problem with mathematical models per se. These are useful tools to study a certain mechanism. Models surely have their limitations though. Their outcome is not necessarily what will happen in reality and the more (uncertain) factors are involved, the more uncertain this outcome will be.

However, the model of the dynamics of intermittent energy on a service based grid is at its core rather simple, there are not that many factors involved and there are detailed measurements of all of those.

This post will be about a very simple model that I created. Maybe I will add more functionally in the future. The program of my choice to build this model is Python and the Pandas module. This module is used for data analysis and can handle large datasets. It is very powerful and lightning fast compared to what I used before. Graphing is done using the matplotlib module.

This is how the simple model works:

If there is one datapoint missing from or solar or wind or total load, then this timeslot is discarded. There were only 17 discarded timeslots in 2018.

The model surely has its limitations. For example, I use a reference year, but every year is different from the previous and the next. There will be slightly different numbers of minimum and maximum production and these will occur on different dates. I am however not interested in what happens at individual timeslots, I want to view an overall effect. I also ran the model with the reference years 2016 and 2017, the overall outcome of those runs is very similar.

Another limitation is that the share of solar and wind might change in the future. At the end of 2018, solar had a capacity of 3,369.05 MW, wind had a capacity of 3,757.185 MW. If wind increases relatively more than solar, then the end result might differ. Also here, I am not trying to predict anything, I just want to find some general trend and see what will happen with the dynamic range when capacities increase.

Only solar and wind data goes into the model. There is no data of other power sources (natural gas, import, pumped storage, nuclear and so on). I consider those as a black box. I currently only look at shortages or overproduction of solar and wind. What will replace the missing power or what will be powered back/exported when overproduction is not something that I am currently interested in.

That being said, this is the production of solar and wind of the reference year:

(It is not a coincidence that the y-axis rises well above the maximum 13,000 MW of total load. Those who read the previous post will probably understand why I left so much space on the y-axis).

A first observation is that solar and wind power production stayed well below demand in 2018. Which is not surprising, it is still a small part of our energy supply.

It is also clear that power demand is higher in winter than in summer at our latitude. This because the days are shorter and it is colder, so we stay more indoors and need more lighting, heating and so on.

When viewing this graph at a higher magnification (click to see the larger version), then there is a difference in appearance of the solar + wind line. Peaks are higher in summer and more frequent than in winter. This has to do with the abundance of solar energy in summer and the lacking of it in winter. However, monthly averages of solar plus wind production are roughly in the same ballpark (except for the first three months of 2018). There is more solar power production in summer than in winter and there is more wind power production in winter than in summer. On average one compensates the other. I also came to that same conclusion in a previous post (however, high production does not necessarily coincide with high demand).

In the first three months there was a lot more wind than in the last month of 2018 and also more than in the first months of 2019. So higher production is possible, but it is not guaranteed.

The fact that production of solar and wind power is well below power demand doesn’t necessarily mean that no problems are expected. There were already issues with the stability of the grid with lower capacities than this. This occurred at times when there was a lot of sun and wind, a low demand and other power sources not being able to power down/off quick enough. This is happening in the black box though, so I will not go into detail here.

This is when capacity increases three times (expected by 2030): 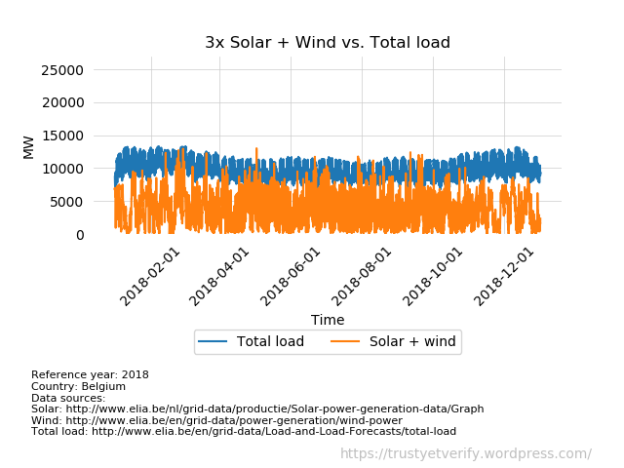 Notice the difference in dynamic range between this graph and the previous one. In the reference year, production of solar and wind goes from 2 MWh to 4,338 MWh. In the 3x scenario, it goes from 6 MWh until 13,015 MWh.

The reason for the oversized y-axis becomes clear when capacity increases six times (expected in 2050):

I used the same y-axis in all three cases so I could compare the three graphs with each other. Dynamic range now stretches along the entire y-axis.

The more the capacity increases, the more balancing mechanisms will be needed. Not only those measures to add more power when there is not enough (fast cycling dispatchable power sources, import, pumped storage, demand response,…), but also those when there is too much power (export, pumped storage, demand response,…). Our politicians are not in a particular hurry to take those measures. They are very focused on adding more solar and wind capacity, not in adding the installations that will balance the intermittent power. That is not really surprising. Adding solar and wind to the mix made energy prices soar and then it might be difficult to admit that adding solar and wind was only the first step. The next step is installing (expensive) balancing systems… 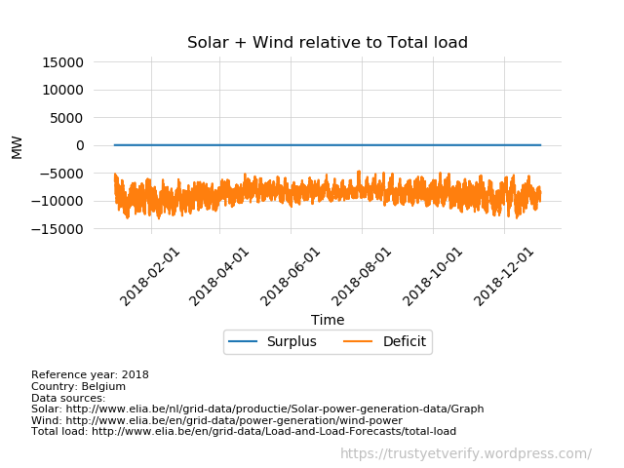 Because there is no overproduction the blue line (surplus) is a straight line glued to zero.

The deficit curve bends upwards in the middle because in summer we need less electricity and there is more electricity from solar installations. Meaning less deficit that has to be filled in by some other energy source.

Solar and wind stay mostly below total load, but already some peaks stick out. At those peaks, all other power sources have to power off or some other balancing measures needs to be in place, whether it is fast backup, storage, export (get more difficult when other countries bet on the same horse and will have the same problem), curtailment, use the excess production for something else, …) to be able to balance this system.

This is what we get when 6 times solar plus wind is compared to total load:

After increasing the 2018 capacity by six times (that is 20,214 MW installed solar capacity plus 18,942 MW installed wind capacity), deficits are still larger than surpluses.

Here are some numbers that the model spitted out for all multipliers:

It is clear that the minimum needed backup (the largest deficit of the year) stays roughly the same. Previous years had also similar deficit numbers. Which is also not that surprising: multiply a tiny number by three or by six or even by ten will make not much difference. Multiplying a small number just results in another small number (albeit somewhat bigger than the previous). Subtracting this small number from the total load will result in a deficit that barely get smaller. Even multiplying by 12, the minimum needed backup stayed high (still 12,741), but at the same time maximum production skyrocketed to four times the maximum demand in 2018).

The next questions now are whether theoretically some kind of storage could be used to top off the peaks and fill in the valleys (therefor balancing the grid) and what is the theoretical multiplier to be able to balance the grid with solar and wind only. That is for a next iteration of the model.

10 thoughts on “A simple model: when capacity of solar and wind increase”