In my series on the impact of intermittent power sources, I got to the point where I was working with a unlimited battery capacity to find out how big that storage needs to be to fill in the gaps of less production with stored power from earlier excess production. I came to the (surprising) conclusion that almost 2,500 GWh was needed to fill in all the gaps. To recap, this is how the stored power looked like over the year: 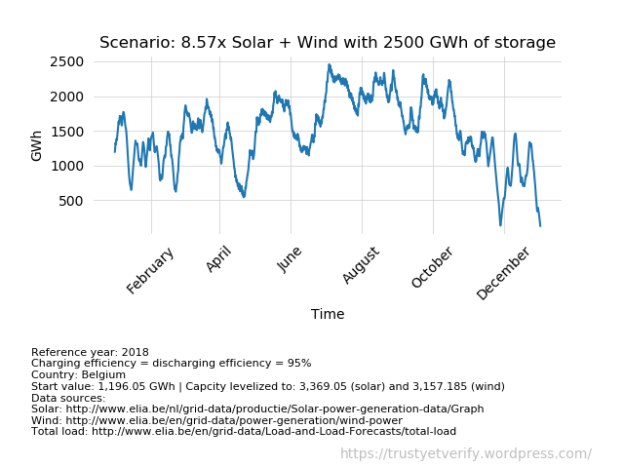 Which I found an awful high number for storage. Therefor my question back then was: is it really necessary to store all that power? What would happen when storage is limited to a value below the optimal capacity?

Until then, the model stored all excess power, no questions asked. Now I coded a limit above which no excess power would be stored, it would be curtailed instead.

So what would happen when storage is limited to 1,200 GWh (that is the theoretical back-of-the-envelope limit value from previous post)?

Those who read the previous two posts will foresee two issues here. The first is the assumed start value. To make the model work, I already had some charge in storage from the previous year. This allowed me to successfully tackle the shortages in the first couple months, but that decision is now coming to bite me when I want to limit storage capacity. It means that storage will be (almost) full already at the start of the year and because the first couple months of the reference year were quite windy, storage will fill rapidly, maybe even at the first quarter hour of the year. All excess power that follows has to be curtailed, until the first shortage starts drawing power from storage.

The second issue is that storage will not be sufficient anymore over the entire year. As seen in previous post, there was a drop of 2,000+ GWh from October 16 until November 27. Limiting storage means that storage will now contain maximum 1,200 GWh on October 16 and having a 2000+ GWh drop beyond that date. A shortage is definitely expected somewhere in that timeframe.

This is what it looks like when storage is limited to 1,200 GWh: 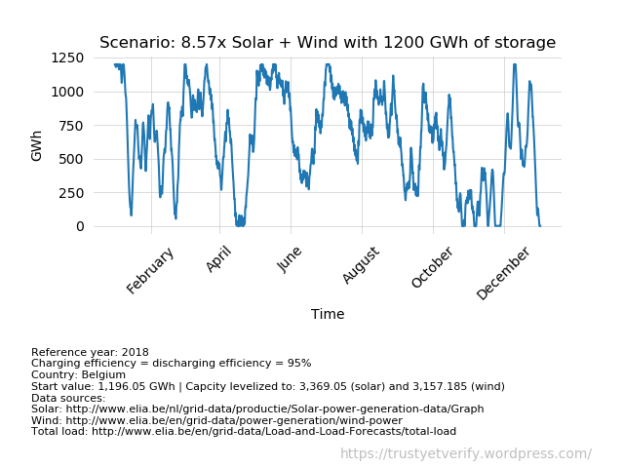 By limiting storage capacity we now get more than 9 days of shortages and also more than 9 days of curtailed power. On the one hand, this doesn’t look that bad, considering that we halved an insanely high storage capacity. On the other hand, the minimum backup (needed to avoid the shortages over the year) is now almost 11,800 MW, which is rather high. Any backup capacity used to fill in this shortage would only be used for a few days in the reference year, meaning it will most probably not make much sense economically.

The 1,200 GWh limit is still unrealistically high though: in the previous battery example we would need 600,000 “super batteries” or almost 86 million Tesla wall batteries (that is 18 per Belgian family). That is still way, way too much.

Then I got the idea to use this example and divide the effort equally over industry and households. I decided to dimension the system to 1 wall battery per Belgian family and the similar effort for industry (32,500 super batteries). This scenario corresponds to roughly 130 GWh and this is what I get when limiting storage to that capacity: 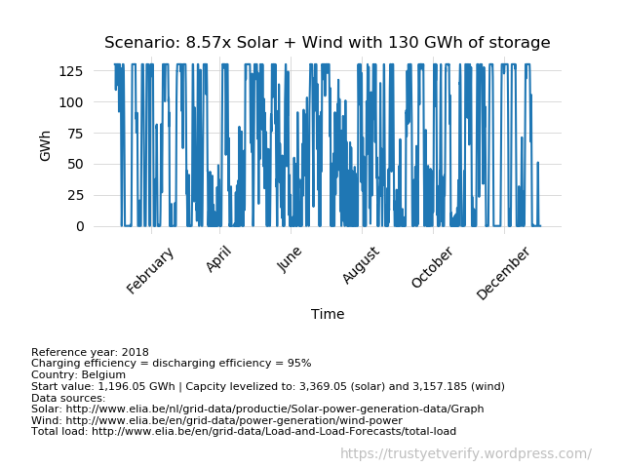 We now get almost 86 days of shortages and almost 70 days of curtailment. Resource wise, at 8 g Lithium per 100 Wh it would require 10,400 ton Lithium, that is roughly 17% of the world’s Lithium production in 2018 (61,800 ton), which is rather unrealistic for such a small country with a rather modest demand (in comparison with other countries). The super batteries (12 m x 2.4 m) alone would take the area of a medium Belgian city (78 km2) if we stack them side by side. If we stack them all on top of each other (3 m), then we would almost reach the point of outer space (100 km). The sky is apparently the limit. 😉

Here are some numbers (I added some additional steps to show the trend):

These are (some of) the effects of limited storage:

But hey, couldn’t that shortage be tackled by increasing the capacity of solar and/or wind, just as was done in the second post of this series? Yes, it could, but the other elements in the equation will change too and it would require a huge capacity of solar and wind to fill in all the gaps with the limited storage. This is not hard to understand. If the storage capacity is much smaller than the shortages, then storage will not be able to (re)charge enough to accommodate for those shortages. The more power is produced for the same limited storage capacity, the more power that will need to be curtailed.