“We have about ten years before we get into a irreversible situation”, said Nic Balthazar (see previous post). Just as in an earlier interview at the end of December 2018, he based his claim on the IPCC SR15 report that was “clearer than ever”. But then, I read the SR15 report before and I didn’t find anything that suggests that there would be tipping points at a 1.5 °C temperature increase.

As far as I know, the SR15 report was commissioned at the 2015 Paris conference and the question back then was: which are the effects of the threshold of 1.5 °C (proposed at the conference) compared to the 2 °C threshold that was valid until that conference?

That is what I also see in the SR15 report: how do the two thresholds compare. So how on earth does he come to the conclusion that the SR15 report shows that there will be a tipping point within ten years and it will be game over for our society in twenty years?

There are several documents involved in the SR15. There is the report itself, roughly 500 pages long. I don’t think he read that. Listening to his explanation in this (and his earlier) interview, I get the impression that he is superficial, unnuanced, overly dogmatic. Not the type that would read a scientific document.

There is also a summary for policy makers. Having only 32 pages, it is much shorter, but I also doubt that he even read that. There was no mention of a “tipping point” or a “return point” or an “irreversible situation” in the summary for policymakers. It points out that the risk of climate-related damage is higher at 2 °C compared to 1.5 °C. Which should not be that hard to understand. I would be shocked if the report would come to a different conclusion.

A much better candidate is the press release of the SR15 report. This is the closest possible reference to a tipping point that I could find:

“Every extra bit of warming matters, especially since warming of 1.5°C or higher increases the risk associated with long-lasting or irreversible changes, such as the loss of some ecosystems,” said Hans-Otto Pörtner, Co-Chair of IPCC Working Group II.

Stripping the uncertainties combined with the idea that scientists don’t ask for a drastic change without a reason, might morph this quote into the certainty of a tipping point at 1.5 °C. If the press release is the origin of the claim, then he didn’t read it very carefully.

If a report can be used to justify a claim that is not in it, then it is not “clearer than ever”. Unless of course the claim of the tipping points within 10 years claim is not based on the report, but originates from somewhere else.

For example, when I was searching for the claim, I was often referred to the Guardian article “We have 12 years to limit climate change catastrophe, warns UN“, written by Jonathan Watts.

Unlike the SR15 report, the article does mention (the risk of) tipping points, twice. This is the first occurrence (my emphasis):

Bob Ward, of the Grantham Research Institute on Climate Change, said the final document was “incredibly conservative” because it did not mention the likely rise in climate-driven refugees or the danger of tipping points that could push the world on to an irreversible path of extreme warming.

This is the second mention of tipping points (my emphasis):

Johan Rockström, a co-author of the recent Hothouse Earth report, said scientists never previously discussed 1.5C, which was initially seen as a political concession to small island states. But he said opinion had shifted in the past few years along with growing evidence of climate instability and the approach of tipping points that might push the world off a course that could be controlled by emissions reductions.

Nor Bob Ward nor Johan Rockström are co-authors of the SR15 report. Although the work of Johan Rockström is referred to in several chapters of the report, it is not regarding tipping points at 1.5 °C.

Basically, it is the journalist who brought in the concept of (the risk of) tipping points, it is not something from the SR15 report.

Another example. Looking on Twitter, I found this tweet that led to more insight in the way the connection was made (my emphasis):

Initially, I was just intrigued by the word “tipping” between square brackets. The tweeter apparently included the word “tipping” into that sentence. But then, was the term “tipping” not used in the article he linked to? Exactly what kind of “point” was mentioned in that article?

The article that was linked to is “IPCC issues dire climate warning, says coal must go to save Great Barrier Reef” from ABC news and it was written by two environmental journalists (Nick Kilvert and Michael Slezak).

The word “tipping” in the meaning of “tipping point” was surely mentioned in the article, twice. This is the first time:

And at 2C of warming, the authors warn the world would risk hitting “tipping points”, setting a course towards uncontrollable temperatures.

Later came this text bloc (the claim that was mentioned in the tweet is in bold):

There is a limit to the amount of carbon we can pump into the atmosphere, beyond which it becomes impossible to restrict the temperature rise to 1.5C.

Researchers say at current emissions rates, the world will hit that point between 10 and 14 years from now.

Overshooting that mark means that our only option may be to employ “experimental and untested” carbon removal technologies.

These technologies are yet to be proven at scale, and critics say they have been used to fuel “magical thinking”.

“There isn’t an easy way to do this,” said Associate Professor Bronwyn Hayward from the University of Canterbury.

“We’ll be forced to rely more on these unproven, risky and potentially socially undesirable forms of carbon removal.”

The title, “No easy way” to avoid reaching tipping point is obviously plucked out of the thin air by the authors. The quoting is interesting. The “no easy way” part came from Bronwyn Hayward, used in the context of limiting to 1.5 °C. The authors substituted the subject of that sentence (restricting of the temperature rise to 1.5 °C) with the avoiding of reaching a tipping point at 1.5 °C, therefor making a connection that is not found in the report…

Also here, it was not the report that gave rise to the connection of 1.5 °C and the tipping points, it were the two journalists who did that.

More interesting, the tweeter took the bait and tweeted the claim (in bold) adding the word “tipping” because it was not in the quote, hence the square brackets. But that “point” -as used in that sentence- is the 1.5 ° threshold, not the “tipping point”. By adding the word “tipping”, the tweeter morphed the meaning of the sentence from reaching a threshold to reaching a tipping point, showing that he also connected the 1.5 °C increase with tipping points (probably tricked into it by the subtitle distorted by the journalists).

The tweeter advised the viewers to read about the IPCC report to understand the magnitude of the challenge. He better would have read the IPCC report himself first, then he would realize that the claim he broadcasted was not in the report.

Also here, the connection between the 1.5 °C and tipping points didn’t originate from the report, but was created by the tweeter himself (probably following the contortion of the journalists) and then broadcasted it as truth via social media, obviously without double checking the original source.

Another tweet, another technique. According to this tweet from the European Greens we are already at a tipping point (probably the tipping point to act?): 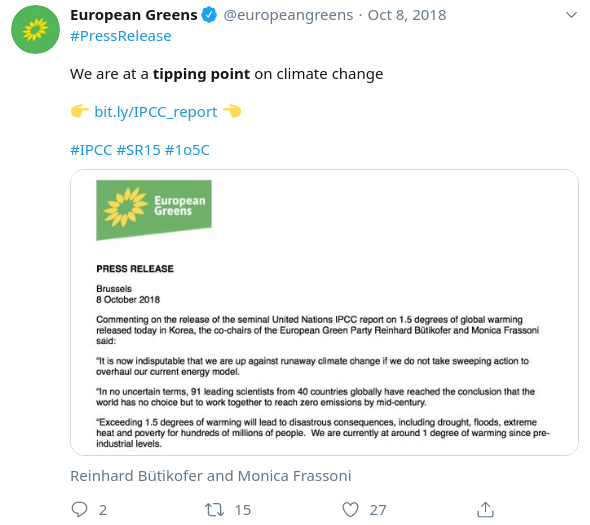 It links to their press release about the SR15 report. These are the first few paragraphs (my emphasis):

Commenting on the release of the seminal United Nations IPCC report on 1.5 degrees of global warming released today in Korea, the co-chairs of the European Green Party Reinhard Bütikofer and Monica Frassoni said:

“It is now indisputable that we are up against runaway climate change if we do not take sweeping action to overhaul our current energy model.

“In no uncertain terms, 91 leading scientists from 40 countries globally have reached the conclusion that the world has no choice but to work together to reach zero emissions by mid-century.

“Indisputable that we are up against runaway climate change”: I surely want to know where exactly they found that in the report. They are clearly over-egging the pudding. The report doesn’t claim that there will be runaway climate change and generally includes uncertainties. The two co-chairs not only dropped the uncertainties, but even went so far to claim that it is now “indisputable”…

“In no uncertain terms”: Balthazar made a similar claim (that the report is clearer than ever), which is a bit ironic being said of a report that is interpreted so differently by so many people and even gives rise to claims that are not made in the report…

Not sure how nth hand information this is, but it clearly deviates from what is actually in the report and was retweeted by 15 well-meaning, a bit naive tweeters (or tweeters whose beliefs align with the message) and therefor didn’t check what the source actually said. Contributing to the distribution of a press release with a claim that do not exist in the original.

It is not surprising though that the two co-chairs exaggerate their claims. The more dire and the more certain the claim, the higher the likelihood that it will be picked up and passed on. Exaggeration pays off, it is in their interest to keep the public alarmed. Then absolute certainty combined with tipping points, after which things get out of control, are a good strategy.

Concluding, the connection of the SR15 report with tipping points was brought in by those who reported on the report. Reading such an article/blog post/tweet with the belief that there is a climate crisis and that the scientists have it all figured out, can lead to the belief that tipping points were what the scientists meant when they wrote the report.

It is like a giant game of whispers where one word gets in and another, maybe even unrelated, word gets out at the end of the chain. More, the new meaning of the claims is much more emotionally loaded than the original, therefor get distributed much easier. That is how a false claim can travel so fast and correction get much more difficult (a correction is much less appealing, therefor will have a much limited range). That is why it got so widespread and correction/critiques doesn’t get to those who were confirmed in their beliefs.

It is my guess that those who say that the SR15 report claims that there will be tipping points within about 10 years, didn’t even read the report. Their information probably came from the (social) media and/or from others who also got their information from the same (social) media. They are not representing what the science says, but what journalists and activists think what the science says.

5 thoughts on “Where does the claim that we only have ten years left come from?”