It has been a while since last post (on the Doctor’s analogy skeptic style). This post will be a bit different. It will be about energy, more specifically about (grid sized) energy storage. It all started with this tweet from Jean-Pascal van Ypersele. This is the text of the tweet: 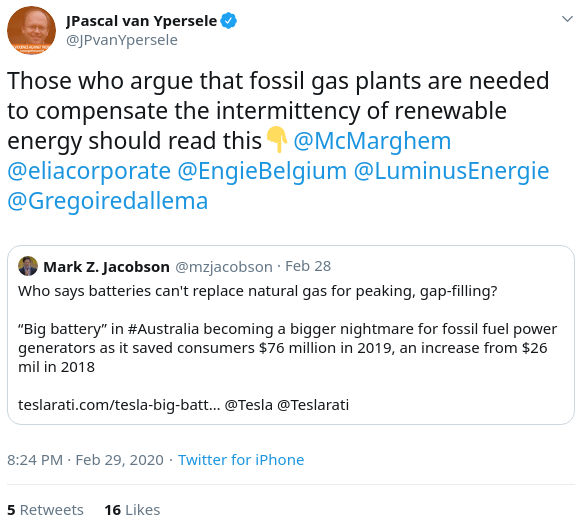 That is an intriguing statement, but rather vague on the kind of technology that supposedly would render those fossil gas plants obsolete. I certainly can believe that there are other ways of compensating for intermittency (for example pumped hydro), although these have different issues that will make scaling up very difficult.

The tweet was sent to several other twitter accounts related to energy (Marie-Christine Marghem is Minister of Energy, Engie and Luminus are energy companies and Gregoire Dallemagne is the CEO of Luminus). Not sure what the reason for that is. Does he think they are not aware of this technology and bring it to their attention? Or does he want to show them that the water is warm already and they should implement it nation wide?

So, I was very curious what technology he wants to point their attention to. Who knows, maybe I even missed some recent innovations… The link goes to another tweet written by Mark Z. Jacobson (a professor civil and environmental engineering Stanford and a 100% renewables advocate):

“Big battery” in #Australia becoming a bigger nightmare for fossil fuel power generators as it saved consumers $76 million in 2019, an increase from $26 mil in 2018 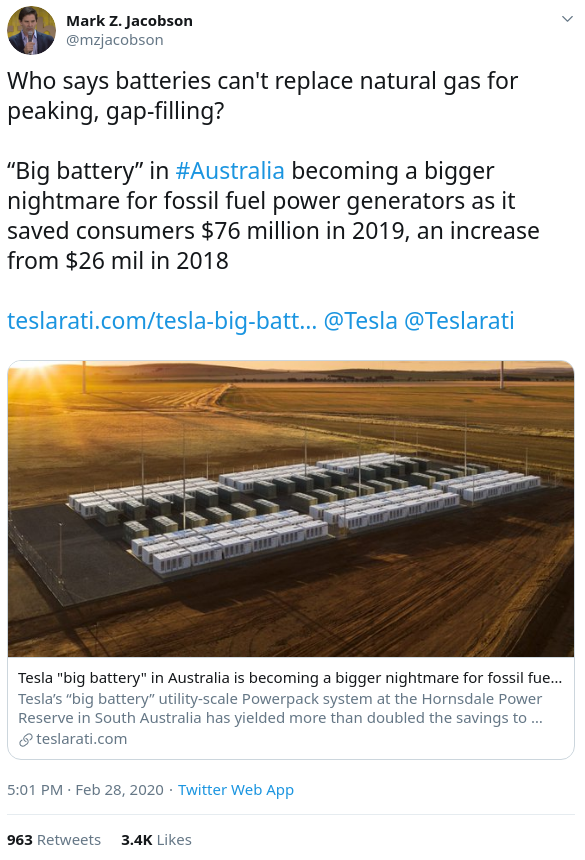 It is clearly about battery power, more particularly battery storage supporting the grid. Following the link in the tweet, I landed at the article “Tesla “big battery” in Australia is becoming a bigger nightmare for fossil fuel power generators“.

Apparently, I didn’t miss a recent innovation at all. This article is not about a new development in storage, it is about an Australian wind farm (Hornsdale) that installed a huge amount of Tesla batteries (the Hornsdale Power Reserve) at the end of 2017.

Technically, these batteries have a capacity of 100 MW and could deliver 129 MWh. That means that the batteries could draw that amount of power for about 1 hour and 20 minutes. Probably less because this could only happen when the batteries were completely charged at the start of discharging and it is also not a good idea to discharge LiIon batteries completely. Not many “gaps” will be filled with that meager capacity.

The only thing these batteries are able to do is some limited peak shaving. Meaning, the batteries will charge when there is a surplus of electricity produced by those windmills (when it is windy) then later discharge (when it is less windy and there is more demand). In this case, that roughly 1 hour time frame saves some time to fire up a (fossil-fueled) power plant to fill in the larger gaps. These batteries are surely capable of absorbing small fluctuations in for example wind supply, but I think it is a bridge too far to suggest that batteries would be able to replace natural gas power plants.

But then, what kind of proof does the article give for batteries being able to “compensate for intermittency” or “replacing natural gas for peaking, gap filling”? Apparently, none whatsoever… The point made in the article is not the practical or technical feasibility of the batteries, it is about the “savings” done by operating these batteries in the grid. According to the article, those savings amount to many tens of millions AUS dollars per year.

This gives rise to the question: if those batteries only have a very limited ability to shave off peaks, then how on earth it is possible that these are able to rake in tens of millions per year?

The saving were apparently connected to FCAS (Frequency Control Ancillary Services). These are services that help to maintain the grid at 50 Hz. If there is more demand for electricity than there is supply, then frequency will fall. If there is more supply of electricity than there is demand, then frequency will rise. If the frequency falls outside the normal range around 50 Hz, this can lead to instabilities or even blackouts. The FCAS market gives a financial incentive to provide such balancing services to the grid and the batteries made their savings that way.

This has nothing to do with the claims that were put forward.

Van Ypersele claimed that gas power plants would not be needed to compensate for the intermittency of renewables, but the article only shows that batteries can make their buck by providing frequency control services to the grid. Those dreaded gas power plants are still necessary, the batteries can only buy some time allowing conventional power plants to get started and do their job.

The article also doesn’t show that these batteries could replace a gas powered peaking plant. As far as I could find, no gas peaking plant was closed because of those batteries.

But then, maybe Jacobson meant that these batteries are able to “save money” already, so that would make it easier to increase their capacity and then be able to replace gas peaking plants? That may or may not be the case, but peaking plants and batteries operate on vastly different principles and these have an impact on how they can be used:

This means that this power needs to be available at the start of the process of filling in. If the shortage takes a day, then the capacity of that battery needs to be 2,400 MWh. Imagine what it would be for batteries that are capable of filling in ALL gaps. If wind supply tanks for a couple days, then that would require an insane amount of batteries when using these to replace gas powered peaking plants.

Ultimately, the Hornsdale Power Reserve is not an example of what both twitterers are trying to show. That batteries are good at frequency control and earn their money doing so, doesn’t necessary mean that they are equally good at replacing gas powered peaking plants.