While creating the graph that I used in previous post, I noticed something that I expected for a long time. Remember, my graph was a recreation of this graph showing the sorted daily contribution of solar and wind in the Netherlands:

It shows that the lowest daily production of solar and wind between January 1 and November 16 was measured on November 16. When I was creating my graph depicting the Belgian sorted daily contribution, I found that the lowest production of solar and wind in Belgium over the same period was also November 16. That should not have come as a surprise, Belgium and the Netherlands are neighboring countries.

That November 16 date was not the only date that appeared in that original graph. Besides November 16 (lowest production) there are also July 29 (highest production) and August 2 (in between). That made me wonder whether those two other days match as well and to what extent this is also true in other neighboring countries. I have some data from solar and wind in Germany, so I will also include Germany into this comparison. Let’s dive right in. 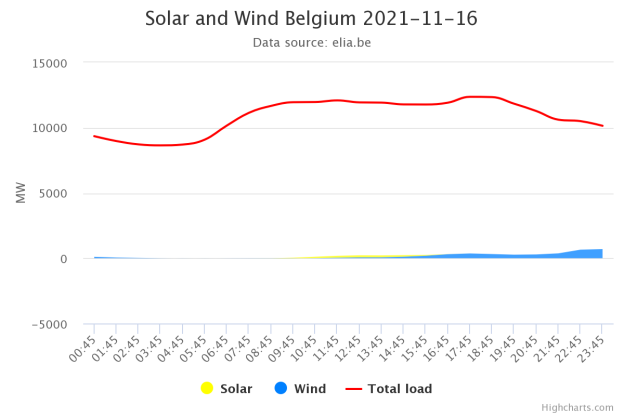 There was hardly any sun or wind during that day.

This low production is not unique to Belgium and the Netherlands. Neighboring country Germany also got its share. Not sure what the rank of solar and wind power is on November 16 in Germany, but this is how solar and wind production looked like:

Apparently, solar and wind also did very poorly in Germany. Again, that should not be that surprising.

At our latitude, we need the most energy in winter when days are short and temperatures are low. November 16 was a Tuesday, so it was a workday and being at the end of autumn means there will be a high energy demand, especially during peak hours when solar energy is (mostly) absent. This is the same for the three countries in the comparison.

Continue with the following date:

Germany also had plentiful production of solar and wind at the same time:

Countries at this latitude have their lowest electricity demand in summer. July 29 falls in the middle of summer, meaning that those three countries have their lowest demand combined with the highest intermittent production. 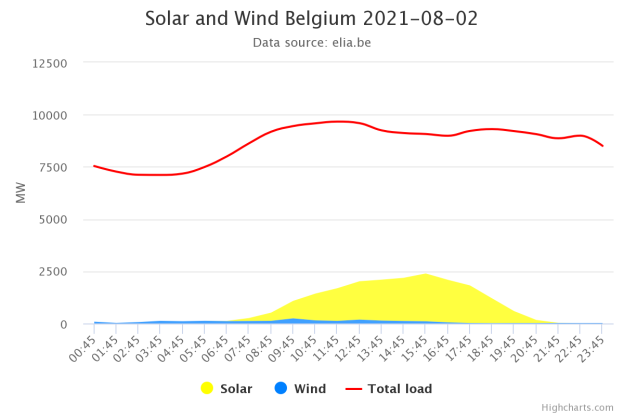 There wasn’t much wind, but solar energy did pretty well.

It is getting boring, but Germany also had a production in between: 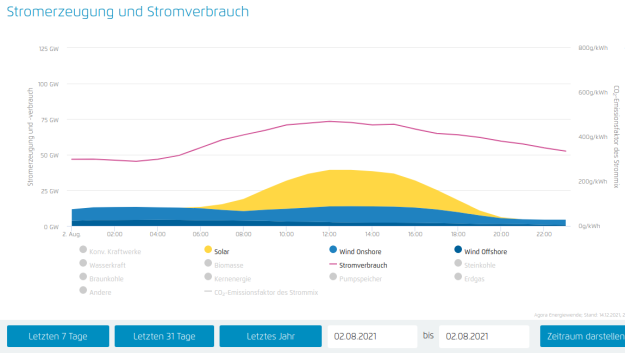 Why is this important?

This wouldn’t be much of a problem if those countries would invest in dispatchable backup technologies to balance the intermittency. Germany is focusing on adding intermittent capacity and its strategy to balance its load is to overproduce and export electricity to its neighboring countries when there is plenty of solar and wind electricity. Belgium and the Netherlands also seem to follow that example, they are focusing on adding solar and wind capacity without adding dispatchable capacity to balance this intermittency.
That is at least three countries interconnected with each other that will experience the same problems at the same time.