There was some controversy about Arctic sea ice in May of this year. Back then, I saw some (contradictory) messages in a quick succession. First, there was a tweet claiming that Arctic sea ice extent was the same as in 1989, followed by a fact-check claiming that this was just cherry-picking and that it in fact going steadily downhill, finally a reply that also the fact-check was cherry-picking and overall sea ice extent was just fine.

So, what is it? Is Arctic sea ice going to hell in a handbasket or is it doing just fine, already recovered to 1989 levels?

It is several years ago since I looked at Arctic sea ice extent data and at that time there was what seems to be a modest beginning of a pause, so I was curious how it evolved since then. Did that pause continue or is it straight down again?

Let’s first look at the arguments from both sides. It all started with a tweet containing this comparison:

The 2022 sea-ice extent indeed seems to be roughly the same as in 1989, at least when comparing … May 15 of both years. That is just a comparison of one day. This is pretty meaningless, no matter which side is using this argument. More, when I compare the sea ice extent over the whole year 1989 and 2022, then I get this (red arrow drawn by me):

The fact-checker did also notice that it is just one day that is compared and called it cherry-picking, rightfully so. He debunked the statement by picking some cherries himself, presenting this figure: 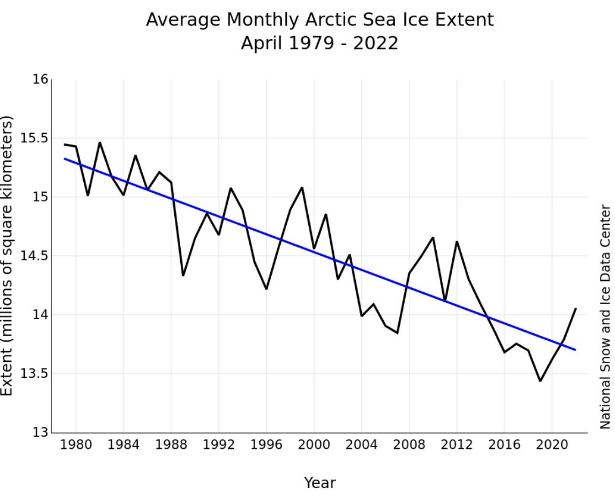 This is the evolution of the Arctic sea ice in April and extent is steadily going down that month. This then in turn prompted the author of the original tweet to call this cherry-picking and wrote that when comparing all data, it is all okay, presenting this dense spaghetti graph:

That might well be correct, but not many will be able to decipher that from this tangled mess. What can be seen is that the black line (2022 data) stays mostly, but not always, below the 2010s and 2020s extent, but it is still rather low compared to previous decades. It is unlikely that this will show an improvement since 1989. Extent is doing not that bad, at least in the last decade, but it is not as good as suggested in that first tweet comparing the May 15 extent of 2022 with that of 1989.

When I untangle these spaghetti strings and look at how this first half year did compared to previous years, then I notice that extent is generally higher than the previous seven years: (click to enlarge)::

Now one can only go back to 2014 to see roughly the same extent. Before 2014, extent was generally higher compared to the same period January until June, which could also be deduced from that spaghetti graph.

This is of course still cherry picking, this time a 6-months period. Sea ice extent can change rather quickly. For example, in 2012, Arctic sea ice extent until June was higher than in the same period in 2022, but from then on sea ice extent decreased considerably until September, leaving it as the year with the lowest minimum extent since 1979.
So, when I want to find out how much the ice melted over the years, I think it is better to look at the annual minimum extent. No matter what the extent on a particular day or month or even a 6-months period was, it seems more relevant how much is left at the end of each melting season.

Downloading the NSIDC data (that both parties also used to back up their claims) and finding the lowest extent value of each year, gives this result: 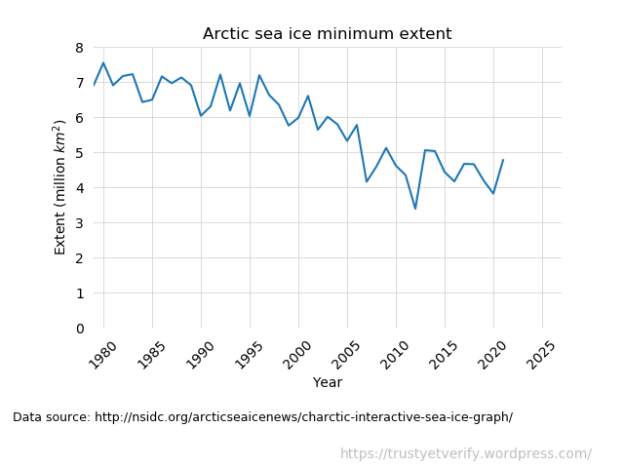 That shows a different picture. Although the trend is downward in the period 1979 – 2012, the extent basically plateaued since then. If that weren’t the case, then there wouldn’t have been not much sea ice left already after the melting season, meaning that this downward trend obviously didn’t continue.

Inspired by the Arctic sea ice minimum volume projection by the PIOMAS project at the University of Washington (used by Wadhams to illustrate his ice-free-by-2015 prediction in 2012), I graphed the (quadratic) trend from 1979 until 2012 and extrapolated it into the future: 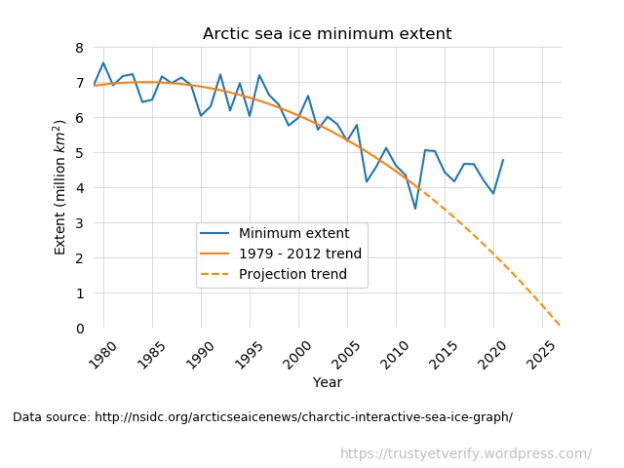 If that trend would have continued, then there wouldn’t have been much sea ice at the end of the melting season by now and zero sea ice by 2027. Something definitely changed.

What will happen from now on is still to be seen. It could continue plateauing for a while, or it could go up (sea ice extent might be part of a sinusoidal wave) or it could as well go back spiraling down.

What I do know is that one could look at it at different angles and see something different. Looking at one day of the year, then it might show that sea ice extent in 2022 is on par with 1989 (if one picks one day from a select number of days). Looking at the first half year, one could only go back to 2014 to see a similar extent. Looking at the extent in the month of April, then the trend is steadily down. Looking at how much ice is still left after each melting season, then there is a breakaway from the decreasing trend until then.

Basically, it is most definitely not as rosy as some would like to suggest, but it is also not as horrible as some others try to paint it.

Update
In the meanwhile, I also tried the cubic trendline on the extent data: 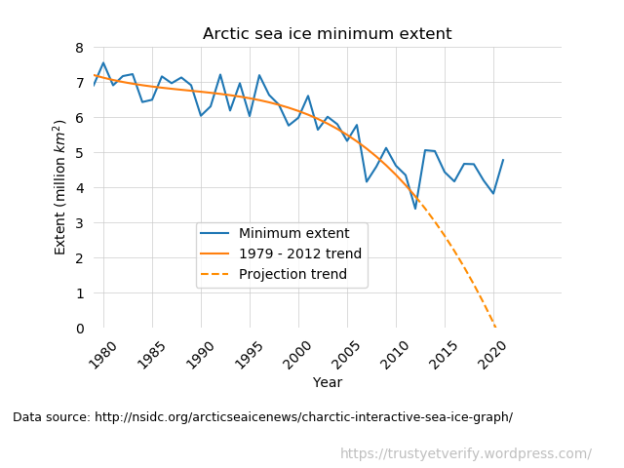 It has a slightly better fit (R2 of 84% vs. 82% for the quadratic trend) and it intersects with the x-axis somewhat sooner.