The Ventilus project is a future 380 kV high-voltage power line with a capacity of 6 GW that will connect the Belgian coast with the rest of the country and will also serve as a (second) interconnection with the UK. There is quite some protest against it. It was planned as an overhead power line, but people living along the trajectory want the cables below ground. To my surprise, the Green party wants them above ground and demands a quick approval of the project by the Flemish Government. This is how Jeremie Vaneeckhout (the Flemish green party co-chairman) explains the urgency of the project (transcription translated from Dutch, my emphasis)

Ventilus is not only the project that can ensure that a capacity of 3.5 nuclear power plants produced at sea by wind energy, that we get that on land. It is also the guarantee that the vehicle fleet can be made electric, can be electrified, and that our grid will not fail, that all West Flemish companies can certainly remain on the grid.

The first time that I heard this, it didn’t make much sense to me. Our largest nuclear reactors have a capacity of 1 GW, but offshore wind currently has a capacity of 2.2 GW, so he is likely talking about a future capacity (but then (much) less than the 8 GW that the Minister of the North Sea envisioned). Where does this 3.5 GW number comes from? My guess was that it is the future capacity of offshore wind by the time that Ventilus will come into use. I found dates between 2027 and 2030, but Belgian offshore wind should already exceed 3.5 GW by then.

There also were others that started to use that the Ventilus-is-3.5-nuclear-reactors claim around the same time relating to Ventilus. The chairman of the Flemish socialist party said the following in an interview on Flemish television news one week earlier (translated from Dutch, my emphasis):

END_OF_DOCUMENT_TOKEN_TO_BE_REPLACED 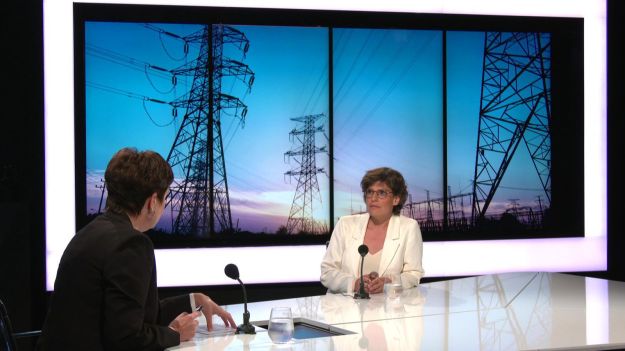 The current plan of the Belgian Government is to keep the two youngest nuclear power reactors (Doel 4 and Tihange 3) open for ten more years (called “plan B”). That was a blow for our Minister of Energy who, as a member of the Flemish green party, relentlessly advocated for a complete nuclear exit (“plan A”). This makes her statement in an interview on current affairs program Terzake rather curious (translated from Dutch, emphasis by the Minister in the interview)

The essence is security of electricity supply. The most performing power stations that we have are our two youngest nuclear power stations, which lifespan we are going to extend by ten years, at my initiative, at my request.

This statement in which she praised herself for keeping the two youngest nuclear reactors open came as a complete surprise to me and many others. She made it very clear in the past that she wanted nuclear electricity production gone, all of it and as soon as possible. This sudden emphasis on herself as the one who initiated and requested this elongation is therefor pretty remarkable.

END_OF_DOCUMENT_TOKEN_TO_BE_REPLACED

A couple months ago, I wrote about the claim of our Minister of Energy that 1 GW of renewable capacity equals 1 large nuclear power plant (she obviously meant “reactors”). I recently came across a variation on this claim made by another member of our Government, the Minister of the North Sea (at least the stretch of the North Sea that belongs to Belgium). Here is what he said about the future plans for wind power in the North Sea as reported by a journalist of a Flemish newspaper (translated from Dutch, my emphasis):

According to Van Quickenborne (Minister of the North Sea), it is even possible to reach 8 gigawatts with a third wind farm by 2040. “This capacity is enormous, it would correspond to 8 nuclear reactors,” says the Open VLD politician, who believes this is enough to supply all Belgian families.

This seems impressive at first glance. Basically, the total capacity of wind mills on the Belgian part of the North Sea is expected to amount to 8 GW by 2040, which the Minister then compares to the capacity of 8 nuclear reactors.

There is a core of truth in this claim (our largest nuclear reactors have a capacity of 1 GW each, so 8 GW would correspond to 8 of those), but it is pretty misleading. It is comparing two different types of electricity generation having a (radically) different output.

END_OF_DOCUMENT_TOKEN_TO_BE_REPLACED

Belgium had some hot days between July 17 and July 20. As expected, the media was full of it. I noticed that around the same time some news media companies made a comparison with the summer of 1976, putting forward that it was hotter now than in the summer of 1976 and, although the number of hot days were much lower, that this doesn’t mean that its severity is being exaggerated by them.

The Flemish public broadcasting company (VRT) did a similar thing and made it into a fact check format. Here is the title of the fact check (translated from Dutch):

CHECK – No, the hot summer of 1976 was not hotter and doesn’t show that climate change doesn’t exist

I naively expected that the fact checker actually found some examples of claims that the summer of 1976 was hotter than 2022 and that this observation somehow would call climate change into question. The fact check linked to four examples that seemingly illustrate such claims, but following those links that isn’t the case…

END_OF_DOCUMENT_TOKEN_TO_BE_REPLACED

Besides the question about the nuclear exit and the questions on the willingness to take action on climate change, there were also two questions that were gauging the level of knowledge of the participants regarding climate change and energy. In the survey, it is called the “perception of the evolution of climate indicators”.

The first question was how the participants perceive the evolution of CO2 emissions in Belgium. The correct answer to this question is that Belgian emissions decreased over time and this was also shown in the reportage in the form of a graph:

That should have been a pretty easy question, but the result is pretty surprising.

END_OF_DOCUMENT_TOKEN_TO_BE_REPLACED

The subject of previous post was the opinion of the Flemish people on the nuclear exit. The survey question that I looked at (“We must keep nuclear power plants open, also after 2025”) was only one of four questions in the category “Policy positions”. There were three other policy positions surveyed that I will look into in this post. I will also look into the results of some related questions like the category “Willingness to take action”, the “Willingness to give up on part of income” and whether “too little or too much measures were taken”.

In the meanwhile, I found a link to the survey report, so I don’t have to rely solely on the general numbers that the reporter selected, but I can show more details.

END_OF_DOCUMENT_TOKEN_TO_BE_REPLACED

The results of a new opinion survey were published at beginning of May. The survey is called “De Stemming” (The Voting”) and is an annual opinion survey of Flemish people commissioned by two media companies, VRT (Flemish television) and De Standaard (Flemish newspaper). It gauges the political views of the Flemish people, their voting behavior/intentions, their view on political issues, their evaluation of political performance and also their opinion on current events (like Ukraine).

I got interested in this survey watching a video describing the results of the item “Climate and Energy”. The video starts with the views on the Belgian nuclear exit (translated from Dutch, red oval around the questions by me):

There is great support for nuclear energy in Flanders: 81% of all Flemish people want nuclear power plants kept open after 2025. 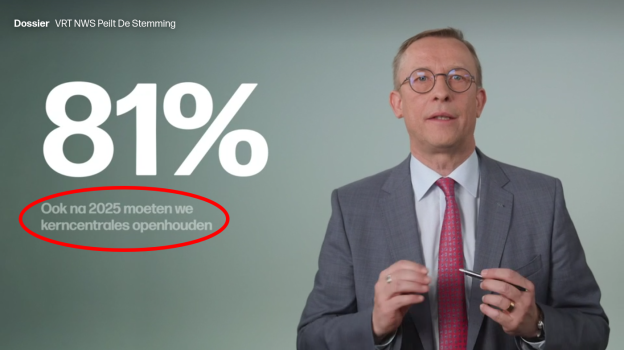 END_OF_DOCUMENT_TOKEN_TO_BE_REPLACED

There was a high production of electricity from solar and wind previous weekend (weekend of April 23-24). As expected, there was the usual cheering and celebrating of this event. One of the many was this tweet from a member of the Flemish Green party (translated from Dutch)

Still need arguments for the roll-out of renewable energy?

Electricity price briefly below zero thanks to sun and wind 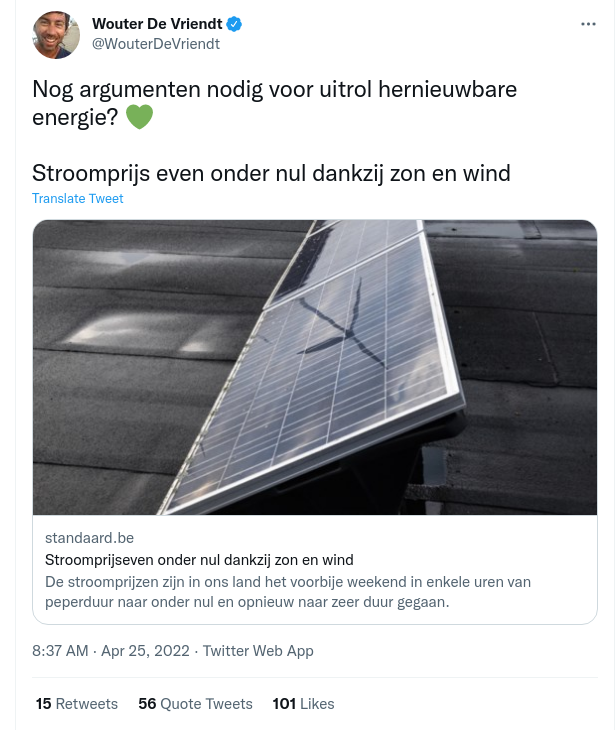 He links to a newspaper article with the same title and brings forward these negative prices as a decisive argument for more solar and wind: if you weren’t convinced yet, then this surely is the argument that will.

I don’t really agree with that. Those negative prices over the previous weekend are not an argument for the roll-out of solar and wind (maybe even the contrary) and it shows his poor understanding of why exactly electricity prices dipped below zero in that weekend.

END_OF_DOCUMENT_TOKEN_TO_BE_REPLACED

The big question was asked again. Remember, a few posts ago, our Minister of Energy tried to answer the question “What happens when the wind doesn’t blow?”, a question she apparently got asked a lot. Back then she managed to evade answering that question.

The question came back in an interview (Dutch ahead) about the energy transitions she gave to a news magazine from Brussels. Initially, it seemed we would not get an answer (the interview was interrupted at the exact moment when the question was asked), but fortunately the reporter was persistent enough to ask the question again later in the interview (translated from Dutch, my emphasis):

END_OF_DOCUMENT_TOKEN_TO_BE_REPLACED

One of the solutions that our Minister of Energy proposes for the energy transition is interconnectivity. In the webinar she gave at the end of 2020 (see previous post) she was pleased that Belgium got connected to the German grid and therefor could start to take advantage of the electricity produced by solar and wind in Germany. I am less optimistic about that. As I found in some previous posts like for example here, here and here, Belgium and Germany are neighbor countries and therefor have similar patterns of solar and wind production.

This is however not the only interconnection that our Minister of Energy wants. A year after the webinar, she signed a memorandum of understanding (Dutch ahead) with Denmark to look into the possibility of a submarine power cable connecting Denmark with Belgium. That made me wonder whether this submarine cable would make it possible for Belgium to take advantage of Denmark’s excess intermittent electricity production and that is what I will look into this post.