The subject of previous post was a scene in the documentary “Before The Flood” in which Leonardo DiCaprio had a conversation with Jason Box in Greenland. I then came to the conclusion that they didn’t give a honest representation of the facts. This post will build on that, but it will expand it to how the public perceives such a scene.

From my own history, I remember that I was interested in the global warming issue, but I was too busy with other things in my life. I wasn’t checking facts, I just relied on what the media was claiming. I believed what they said was true and, although I assumed that they were exaggerating the issue, I believed that in essence they were right. This post will be about how people with no background on the issue (and do not check these facts after viewing for example this documentary) will probably perceive this scene.

END_OF_DOCUMENT_TOKEN_TO_BE_REPLACED

After the claim of the projections of the climate models being “really conservative”, the scene continued with a conversation about the Greenland ice loss:

[Jason Box]
If climate stays at the temperature that it has been in in the last decade, Greenland is going away.

That is interesting. When I heard this claim, it started to itch to explore this a bit more. But before doing that, let’s see how the conversation on the glacier continued. Leonardo walks towards a crevasse in which there was a violent stream of glacial water finding its way to the ocean:

END_OF_DOCUMENT_TOKEN_TO_BE_REPLACED 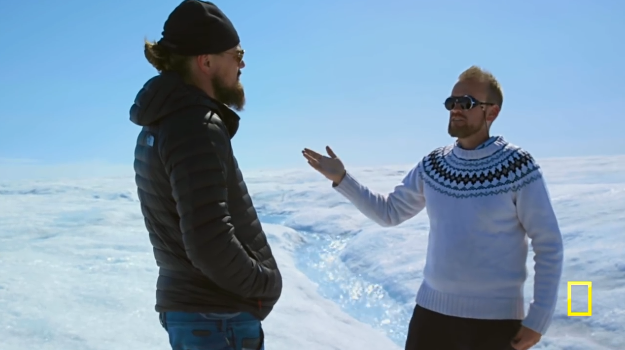 In the documentary “Before the flood” there was this scene in which Leonardo DiCaprio was in a conversation with Jason Box on a glacier in Greenland. This came after a scene of Leonardo DiCaprio in his earlier days when he still was thinking that global warming could be solved with small individual actions, like changing light bulbs. Then an ominous sounding voice-over:

But it is pretty clear that we are way beyond that point right now. Things are taken a massive turn for the worse.

Cue in a calving glacier, followed by Jason Box saying:

“We keep finding things that aren’t in the climate models. They are used to project the future. So that tells me that the projections for the future are really conservative.”

END_OF_DOCUMENT_TOKEN_TO_BE_REPLACED

When I was about ten years old, there was an animated cartoon series on television, called “Calimero”. Calimero is a cartoon character, a black chick in a family of yellow chickens. It is a charming, innocent hatchling, still wearing half of its egg shell on its head. In each episode it is getting into situations where it genuinely trying to help, but because of its inexperience and its inability to recognize unwanted situations, it is never coming to a happy end. At the end of each episode it is repeating its mantra: “This is not fair, they are big and I am small”. Calimero is the prototype of an innocent, good-meaning victim in a mean world.

Watching the documentary “Before The Flood”, there was a scene that reminded me of Calimero. It was the scene in which Michael Mann explained his struggles with regard to the hockey stick controversy in an interview taken by DiCaprio. Here is that part of the interview:

END_OF_DOCUMENT_TOKEN_TO_BE_REPLACED

In the documentary “Before the Flood” there were several scenes that stood out like a sore thumb. One of them was a scene in which Michael Mann claimed:

There is about as much as robust a consensus human caused climate change than there is for any matter in science, be it the theory of gravity. 97% of climate scientists agree that the globe is warming. Our climate is changing and it is due to fossil fuel burning and other human activities. Unfortunately we are fighting this massive disinformation campaign to confuse the public.

The comparison between human caused climate change as a robust consensuses like gravity was quite puzzling. So I searched the internet for what he could mean by this claim. I ended up with the recent article “We can’t afford to wait”, in which he and Kim Kasting explain their gravity example and what it means for climate science. This is how they explain it, apparently as a reaction to a column of a Jonah Goldberg on settled science (my emphasis on the most important parts to understand the reasoning):

END_OF_DOCUMENT_TOKEN_TO_BE_REPLACED

The building where I work has a sophisticated fire alarm system. It is incredibly sensitive and on a regular basis the alarm went off, without having a fire. In the beginning everybody fled the building as quick as possible and then later got to hear that it was just a false alarm. A lot of things could trigger it. Some dust, high humidity in a room,… After a while people didn’t react to it anymore. When an alarm sounded again, someone went to the control box and muted the alarm. As far as I can see, the control is now disabled for quite a while.

I had to think about this when I watched the alarmentory “Before The Flood” from Leonardo DiCaprio. The movie is 1 hours 35 minutes long and as expected it is one-sided, superficial and rather predictable. It is a rehash of the usual style of images that the media is bombarding us with for several decades. Smoking chimney, cars, storms, wildfires, floods, droughts, melting ice, mass migration, coral reefs, the news flashes in the background describing the extremes,… All attributed to our emissions.