A remarkable tweet that I stumbled upon (translated from Dutch):

You often hear on the right that Belgium has the highest tax level. What is not told is where the money is going. 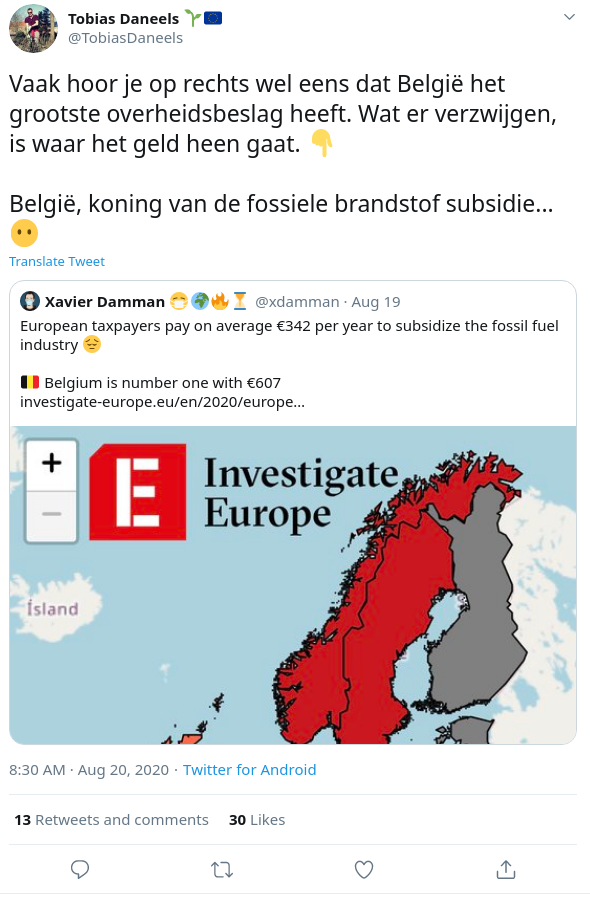 END_OF_DOCUMENT_TOKEN_TO_BE_REPLACED

Apart from people traveling by canoe to the Paris conference, there are also people that want to bring in their canoes from oversea. One of them is the Lummi Youth Canoe Family wanting to ship their 39 foot traditional cedar canoe over the big ocean to Paris, in order to take place in a media event.

This is how they explain their project (emphasis by the Lummi):

The Lummi youth canoe family will be traveling to Paris, France for the United Nations climate negotiations, December 5th – 12th, 2015!

And they need your help!

They are joining the Indigenous Environmental Network’s Indigenous Delegation to Paris and their Canoes to Paris action.

In recognition of the sacredness of Mother Earth and the spiritual relationship to the water, Indigenous communities from across North and South America will be bringing canoes to Paris to highlight the risks our people face because of climate change and rising sea-levels! We will be performing a highly visible and media focused direct action in the Seine River right through the heart of Paris! That’s right! We wish to bring our 39-foot traditional cedar canoe to Paris!

Although I understand that this is a symbolic action and with all due respect, but I don’t think they thought that part through very well. The Lummi are living in the west of Washington. That is very far away from Paris. Crossing the United States and the Atlantic Ocean, that is more than 6,100 kilometers. Hauling a 39 foot canoe and (if I can rely on the photo of their group) about 16 people from Washington to Paris (and probably back again), will no doubt require a substantial amount of fossil fuels. I am wondering whether they really believe that emissions are impacting them, as they are telling us? The 185 who liked the project and the more than 4,100 people who shared the story via social media, didn’t mind or didn’t noticed this either.

They raised already $16k+ from the $20k they seem to require. Unbelievable how much money can be available for a symbolic action that obviously requires a huge amount of fossil fuels … in order to demand emission reductions. They are willing to invest a lot of (other people’s) money and that makes them no different than our political leaders that are now flocking together in Paris.

Yesterday at the 7 o’clock news there was an item about 75 CEOs of companies and NGOs who signed an open letter (Dutch) to our federal government. Some of them are Bond Beter Leefmilieu, Delhaize, Electrabel, Natuurpunt, Nestlé Belgium, Siemens, Solvay, UCB, Umicore and WWF. Truly a mishmash of NGOs and big companies. They apparently want to play a more active role to reduce emissions and even to take the lead in doing that.

I have no problem with that, if they really want to, they can just do that. Why even have a fancy reception and writing an open letter to the federal minister? In the news report there were high words like far reaching commitment, becoming leaders in transition, opportunities abroad, the first / the best / the quickest in the battle against greenhouse gases, the urgency to act, jobs, innovation, yada, yada.

What jumped out to me was that loads of hype words were used in the news report: climate policy and climate deal (hey, as if politicians have the power to control the climate), carbon reduced (I think they mean carbon dioxide, not carbon), climate resistant economy (what the hell is that). Impressive words, but quite meaningless.

My immediate reaction while watching the story: where is the catch!?!? As far as I know, none of those companies or NGOs are charities.

So I went looking for that open letter. In the many reports in the media there was strangely no link to that open letter. Searching for it had no results initially, but in the end I found the open letter “Message from Belgian stakeholders in support of the COP 21”. It was hard to find because it was written somewhat different from how it was reported in the media. In the beginning I even thought that I had the wrong document. Reading it I understood why no links were given. The open letter has high PR value, but is pretty low on substance.

The letter was rather short (about 50 lines) and it wasn’t written in the form of a letter, more like some pamphlet from WWF or the like.

END_OF_DOCUMENT_TOKEN_TO_BE_REPLACED

There was some commotion on twitter caused by some tweets by Naomi Oreskes. It started rather innocently with an earlier, probably at that time not much noticed, tweet. But then it culminated into something I have seen several times before. But before we get to that, bear with me and let’s first have some background.

As I have said, it started rather innocently with an earlier tweet. In it she described her passion for snow to a follower who asked if she was in Idaho:

At first it seems just a little chat between two like minded spirits. But it triggered a strong reaction because it was in such stark contrast with a more recent statement where she criticized the last encyclical not seeing “extreme consumerism” as the issue:

Going “a lot” to Utah from her home (a round trip of almost 5,000 miles) would give her a huuuuuuge carbon footprint. If that isn’t “extreme consumerism” then I don’t know what is.

Whether done with “love” or not.

She apparently didn’t see it that way and in her typical style, ranting about the “deniers”, she tweeted this response:

I had to laugh at this one, because that was not the issue.

END_OF_DOCUMENT_TOKEN_TO_BE_REPLACED

At beginning of this week, eleven Flemish celebrities wrote an open letter to the Federal and Regional Governments, threatening with legal action when failing to take action on climate change within 30 days. After that, they will proceed to court. They want a reduction of emissions of 40% before 2030 and 85-90% before 2050 to keep global temperature below 2 °C.

As if there is a control knob to influence global temperatures.

It was inspired by the actions of Urgenda, which done the same in The Netherlands last year.

The group behind this action is klimaatzaak (Climate Case). They choose the beginning of this week because it was also the start of the climate top in Lima. The media, as always, uncritically took it over and even whipped it up. We got loads of climate propaganda poured over us in the last days.

The action seemed to backfire. The reaction of the public was devastating. I heard and read things like

I didn’t really expect so many reactions. Apparently, there seems to be a large gap between minds of the public and the minds of the activists/media. It was also striking how many of the public knew about the pause, the lack of debate, the “consensus” and many other subjects the media fails to tell us about.

Minister Schauvliege (Flemish Minister of Environment, Nature and Agriculture) also reacted. She said that this was a matter of us all and asked whether those celebrities could acknowledge their own emissions.

She hit the nail straight on the head.

This seems to be the Achilles heel for those celebrities. Two of those eleven celebs were very vocal in this, but weren’t exactly free of climate sins. They seem to have a huuuuuuuge footprint.