While creating the graph that I used in previous post, I noticed something that I expected for a long time. Remember, my graph was a recreation of this graph showing the sorted daily contribution of solar and wind in the Netherlands:

It shows that the lowest daily production of solar and wind between January 1 and November 16 was measured on November 16. When I was creating my graph depicting the Belgian sorted daily contribution, I found that the lowest production of solar and wind in Belgium over the same period was also November 16. That should not have come as a surprise, Belgium and the Netherlands are neighboring countries.

That November 16 date was not the only date that appeared in that original graph. Besides November 16 (lowest production) there are also July 29 (highest production) and August 2 (in between). That made me wonder whether those two other days match as well and to what extent this is also true in other neighboring countries. I have some data from solar and wind in Germany, so I will also include Germany into this comparison. Let’s dive right in.

END_OF_DOCUMENT_TOKEN_TO_BE_REPLACED

This tweet sums up the biggest problem with intermittent power sources:

Yesterday, a fairly dramatic low in terms of solar & wind output. Fortunately, there were also great days this year.
Although sun and wind often complement each other, the total forms a rather ‘skewed’ distribution. We will have to learn to deal with that soon.
#graphoftheday

This is the graph he is talking about:

END_OF_DOCUMENT_TOKEN_TO_BE_REPLACED

But because Snowy Hydro 2 may come in at less than the $10 billion or so I expect and because I can’t be certain the additional return from the battery setup will be enough to replace them when they fail, I can’t pick a winner.

The second argument is the most interesting. That statement looks rather cryptic and the meaning depends on the definition of the words “return” and “fail”.

“Return” could also just mean output and “fail” could mean when the additional output of the battery/solar scenario is insufficient (additional output of the setup is not enough to fill in demand and then there would nothing to replace it with). If that is what he means, then he is rightfully pointing to the fatal flaw in his calculation:

END_OF_DOCUMENT_TOKEN_TO_BE_REPLACED

Central in the tweet of our Minister of Energy (see previous post) is the role of Germany in the event of July 29, when Belgian offshore windmills were shut down: (translated from Dutch, my emphasis)

Due to a lot of German wind & sun + imports, Belgium has the lowest prices.
Due to negative prices, a lack of flexibility and storage, offshore wind is currently being shut down.
100% renewable via flex & storage. Look to the future, instead of recipes from the past. 1/5

Followed by (translated from Dutch, my emphasis):

Production in Germany: 24 GW wind and 16 GW solar. Belgium benefits extra thanks to its import capacity, flow-based (flow factor competition) and the minram70%. 2/5

As I understand it, (forecast of) surplus electricity by solar and wind from Germany kept Belgian (day-ahead) prices low and Belgium benefited extra from this surplus electricity on July 29 because of its import capacity. I can understand the statement that this day-ahead price combined with a lack of flexible power sources and storage can lead to wind mills being shut down. I however find it highly unlikely that we benefited extra from import of German electricity.

The Minister of Energy provides this chart to support her claim:

END_OF_DOCUMENT_TOKEN_TO_BE_REPLACED

The good news keeps on coming: Belgium is worldwide in the top 15 of “Wind and Solar countries”. More specifically, we are at 9th place having a share of 20% of our electricity production from solar and wind in 2020: 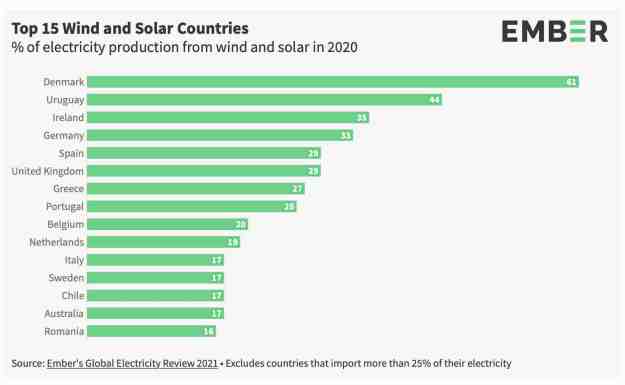 It didn’t end there. China, the EU-27 and the United States are responsible for more than two-thirds of global generation, Vietnam went from 0 to 14 TWh in just 3 years, Chile and South Korea have quadrupled their wind and solar generation since 2015, and many other countries (Brazil, China, India, Mexico, Turkey and Uruguay) have tripled it. Also, many countries now get around a tenth of their electricity, which is the global average for electricity generation from solar and wind.

Of course, the transition to solar and wind is going to be cheap. According the article, the cost for solar and wind are at a tipping point with almost two-thirds of wind and solar projects built globally last year will be able to generate electricity cheaper than even the world’s cheapest new coal plants.

That all sounds pretty impressive, but as usual in alternative energy reporting, this is just half of the story. Luckily, the author also showed the readers a glimpse of the challenges ahead, putting these glorious numbers somewhat in perspective.

END_OF_DOCUMENT_TOKEN_TO_BE_REPLACED 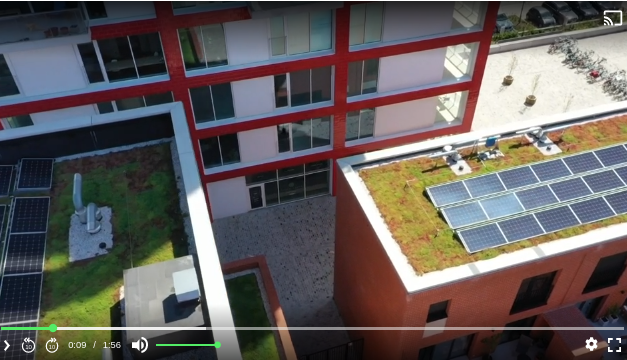 Hooraaaaay, our energy problems were just solved! I just viewed a short video about a “smart” energy system (Dutch ahead) that will power a new residential area called “De Nieuwe Dokken” in Ghent (Belgium). According to the video, the components of this system are:

Of course, it will be cheap, dirt cheap even. At several occasions in the video, the economic benefits of the system were praised. For example, electricity prices went negative on May 30 and one even got paid to take electricity from the electricity grid.

Wow, where do I have to sign up for that!?

When there is no(t a lot of) sun combined with high consumption, don’t worry, then the system could provide the electricity stored in the car batteries (after those gorged themselves with plentiful of energy during day) to the households.

Easy peasy. See, it doesn’t have to be that complicated.

Our Minister of Energy also made an appearance, proudly stating that this is how our (national) energy system will look like in the future, just on a larger scale. How cool is that! Our tiny country is showing the world how it is possible to realize 100% renewable energy on the cheap.

You are welcome, just thank us later 😉

There are however some, ahem, small details that for some reason were not explained in the video…

END_OF_DOCUMENT_TOKEN_TO_BE_REPLACED

The Hornsdale Power Reserve is about to get an upgrade. The Hornsdale Power Reserve is a grid-sized battery build by Tesla in South Australia. It has a capacity of 100 MW and can deliver 129 MWh. I did a series on it back in March, starting with the claim that this battery could replace natural gas for peaking and gap-filling (which is not the case). The upgrade will add a capacity of 50 MW and it can deliver 64.5 MWh.

The pv-magazine article points out that the additional capacity will be put to use for frequency control and inertia. I could understand that, the main function of the original 100 MW battery is already frequency control and this service generated quite some money for its owner. There was also this claim (my emphasis):

ARENA, which contributed an AU$8 million grant toward the expansion, also believes the upgraded battery could also help to reduce renewable curtailment in South Australia. Indeed, AEMO’s Chief System Design and Engineering Officer, Alex Wonhas, said that the expansion enabled the “optimal use of this world leading battery to support higher levels of renewable integration.”

The author also didn’t shy away from using terms like “mega” and “highly successful” in the article. That all sounds very promising, but from looking into the Hornsdale Power Reserve while writing the earlier series, I think it is presented way nicer than it actually is. Even a “mega”-battery of 100 MW / 129 MWh is still tiny grid-wise and adding another 50 MW / 64.5 MWh will probably not make much of a difference.

This made me wonder: what is the current share of battery power in the South Australia grid? And what difference would this upgrade make once it gets online (the homepage of the Hornsdale website states that the expansion is still “under construction”)?

Time to look at the data.

END_OF_DOCUMENT_TOKEN_TO_BE_REPLACED

In previous posts, I threw around a bunch of numbers and sometimes mentioned that these are insanely high, but never gave an idea how high. I now will try to put them in perspective in this post. I found a sweet spot where solar and wind both could deliver enough power to meet demand. This happened at 8.57 times the current capacity of solar and wind, supported by seasonal storage of 2,421 GWh. I called that an insane amount of storage. How would this compare to actual demand over the year?

END_OF_DOCUMENT_TOKEN_TO_BE_REPLACED

When comparing seasonal characteristics of solar and wind in previous post, there was one graph that got my attention:

It shows wind got shortages (visible orange lines) during the summer months, while solar had its best production at the same time. Solar got shortages in the beginning and end of the year, while wind had a decent production at the same time. Then it is tempting to assume that solar and wind are complementary. I understand that solar and wind are only complementary on average. When it comes to individual timeslots, they are certainly not complementary. That is an disadvantage when production and demand need to be in balance at all times.

What if we throw in storage? Is there an optimal mix of solar and wind that can deliver as much as possible direct power from solar and wind, therefor minimizing storage requirements? Separately, both solar and wind have dizzying storage requirements. Yet they could be balanced by means of 2,421 GWh storage in my first post on storage. This tells me that quite some gain is possible combining them both. Can we go even lower by varying both capacities? Maybe even in a storage range that is feasible? However, at a higher multiplier both drifted apart and solar was left far behind, so it might not be as simple as it looks.

END_OF_DOCUMENT_TOKEN_TO_BE_REPLACED

Recently, I learned that that demand response (a change in energy consumption in order to deal with intermittency) would be more problematic for increasing solar capacities and easier for increasing wind capacities. Initially, that seemed a bit contra-intuitive to me. Solar is doing best during the day when most power is needed, so until then I assumed that it would be easier for demand to follow solar power (coinciding with the demand pattern) than wind power (which is more erratic).

However, there are some things that might interfere with that reasoning. For example, sunny weekends or holidays could spell trouble (high production, yet low demand). More, at our latitude, solar produces most power in summer when least power is needed and least in winter when most power is needed. This however allows for building backup during the summer months to be used later when there is a shortage.

The dynamics of wind power is different. At our latitude, there is more wind in winter when we need most power and less in summer when we need least power. It is however not guaranteed to blow when demand is high and then it also requires some kind of backup/storage.

Looking at it over a longer time frame, demand should follow wind better, potentially decreasing the need for demand response. Time to adapt my simple energy model to find out.