Last Friday I read this headline in the paper version of a Flemish newspaper (Het Nieuwsblad) (translated from Dutch):

The journalist of course doesn’t mean that our Belgian trains will be retrofitted with gigantic sails. Or a wind turbine on top. The story goes like this: 20 windmills of a nominal capacity of 2MW will be erected along a railroad track, those will be connected to the grid and the electricity generated by the wind will power 170 trains, even having some spare fulfilling the electricity needs of about 36,000 families.

As you can guess this is only part of the story and no background is given by the journalist. Those windmills obviously don’t directly deliver the electricity for those trains to drive (otherwise only a small number of trains will drive when there is little wind and even no trains will drive when there is no wind). What he actually means is that those windmills produce ON AVERAGE enough electricity to let those 170 trains drive. The problem with this is that trains don’t drive ON AVERAGE, they (should) have a strict schedule.

Trains use electricity while they drive. That is mostly during the traffic peak in the morning and the evening at weekdays, a bit less during the day and even less to none during the night.

Windmills deliver only electricity when the wind is blowing. It has to blow enough to move the blades, but not too much (otherwise the blades will be locked for security reasons).

Those two schedules don’t necessarily fit each other. Let’s look at how wind energy works in the real world: 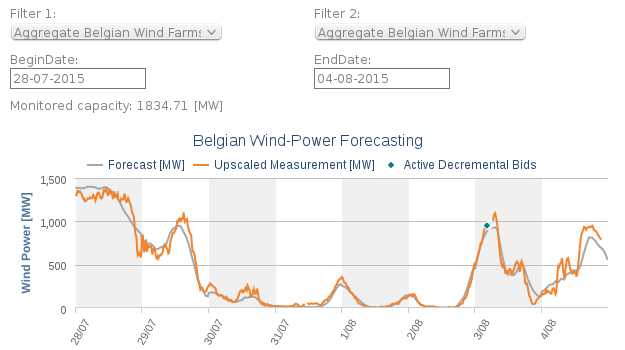 The news paper article gives the impression that one can just add windmills to the grid and that this makes it greener. The reality is that no fossil fueled plants will shut be down for the same capacity as that average production and if plants need to shut down it endangers the continuous operation of our grid.

But one could say: our grid works, alternative sources get priority and we didn’t have to use the outage plan yet (the outage plan is a plan to disconnect rural areas in case of an imminent blackout). That is true, the current situation works and the outage plan wasn’t used yet, but wind and solar currently only produce a few percent of our demand, yet we already came very close to blackouts several times. This for an energy source that delivers (on average) only a few percent of our demand. What awaits us when we get to say 20%, 30% or even 100% (as some envision) of our demand to be fulfilled by those sources?

Winter is the time that wind (and also solar) are underperforming, yet at that same time we have the highest energy demand of the year. Meaning the complete capacity of fossil fueled and nuclear plants needs to be available. As a consequence of the priority rule for wind/solar, some fossil fueled plants needs to be mothballed during summer. Making them more uneconomically. Add to that the effect of subsidizing wind energy, which makes it harder for classic energy sources to compete → therefor using the cheapest possible source (coal) to cope with the situation → even more emissions. Also those 170 trains will get less green power in winter and this has to be compensated by other sources that has to be available.

I see lots of incentive to erect more wind mills, but hardly any to balance that intermittent supply in a continuous working grid. I guess the reason for this is that most people (including our politicians) don’t understand the intermittency of alternative energy source and their effects on the operation of our grid. The way the article is written is living proof of that. The journalist seem to start from the assumption that windmills produce electricity in the same way as fossil fuel and nuclear plants do. Then it is only a small step to believing that just adding more intermittent sources to the grid is the way to go. Which gives rise to the hooray stories of x number of families or x number of trains that will be provided “green” energy from windmills.

The journalist however came very close to the core of the issue, probably without even realizing it (translated from Dutch, my emphasis):

[…] Travelers will not feel or notice it, but for the first time in our country, wind powered trains will drive from the end of autumn on.[…]

[…] But what when there is no wind? On the days that there is no or too little wind, the trains will drive on “normal” electricity. […]

I have no problem with alternative energy. Sooner or later we will need alternative sources. But rushing them into existence before they are ready and neglecting the current issues with it is not going to help. You can not just add intermittent energy sources to a continuous working grid, expecting it to stay working properly. Yet this is exactly what such fairytale stories are suggesting.