From the half-news department comes the article titled Capacity of wind energy has overtaken coal in De Morgen (the Flemish Guardian). 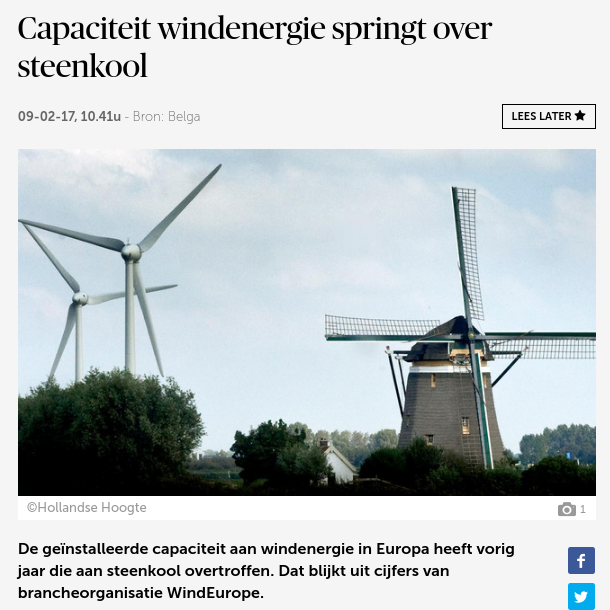 This is how it is explained (translated from Dutch):

Last year, the installed capacity of wind power in Europe surpassed that of coal. This according to figures from the industry association WindEurope.

The source was an article with the same title from Belga (a news agency) and it was copied verbatim by a huge flock of news sites in Flanders.

The article in De Morgen jumped out as a sore thumb: it appeared in the section “Science”. Probably copied by a “science” journalist who had no clue that comparing installed capacity of wind with coal is meaningless and a direct comparison of the two is misleading.

After some searching, I found the original source: a report compiled by WindEurope, with the catchy title: Wind in power: 2016 European statistics. “Europe” in fact being the “European Union”, but with also some mentions of Turkey. I found the numbers behind this claim on page 15:

However, direct comparison of installed capacity of wind and coal is meaningless. There is a big difference how coal-fired turbines work compared to wind turbines. A coal-fired turbine can deliver its capacity as long as someone shovels coal into it, while a wind turbine only delivers when there is (enough) wind. This comes to on average only 20-25% of its capacity. Calculated from the numbers that I found in the report, it was about 22% in 2016 for the EU.

This makes the comparison misleading, since this statement will give the perception that electricity generation by wind is currently on par with that of coal, even a tad higher. This is not the case. Although the installed capacity of wind surpassed the installed capacity of coal, electricity generation by wind will be lower than by coal.

The report mentions the electricity generation figures of wind in 2016, but not that of coal. So it was not possible to check whether this is the case in practice. However, the report mentioned that 44% of the capacity of wind energy was installed in one country: Germany. Installed capacity in Germany in 2016 was 49.64 MW for wind and 49.28 MW for coal. Wind just surpassed coal in Germany too, similar to the EU. 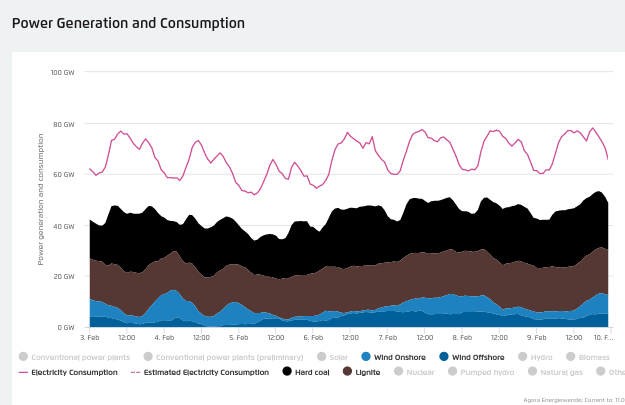 Although the installed capacity of coal is slightly less than wind, it generates by far more electricity. It is winter now, maybe the situation was different in summer? This is a week in the middle of July 2016:

Seems rather similar. This example shows why this direct comparison of wind/coal is misleading. Electricity generation by wind will be perceived almost five times higher than it is in reality.

Back to the report. This is how the executive summary started (my emphasis):

Europe installed 12.5 GW of gross additional wind capacity in 2016. This was 3% less than the new installations in 2015. With a total installed capacity of 153.7 GW, wind energy now overtakes coal as the second largest form of power generation capacity in Europe.

The authors drove the message home in graph 1 (the “cumulative power generation capacity” of the different power sources). There were four distinct hooray moments for wind:

Apparently, wind overtook fuel oil in 2007, nuclear in 2013, hydro in 2015 and finally coal in 2016. All of those are distinctly different from wind. Suppose that we would redraw the graph to show electricity generation (that is the way the target audience would understand it), then there probably wouldn’t be a hooray moment for wind yet. coming close to overtake fuel oil. Solar energy (with a capacity factor of about 15%) wouldn’t even come close of overtaken anything.

Concluding, although the statements in the article of Belga are mathematically correct, installed capacity is an utterly meaningless metric when comparing a conventional with an intermittent energy source, especially when not explaining the fundamental difference between the two.

8 thoughts on “Half News: (installed) capacity of wind energy has overtaken coal”