Back to a previous series on the prediction when the glaciers in Glacier National Park would be gone. In hat series, I focused primarily on two specific predictions (with the end date of 2020 and 2030) and how these were presented to the public. I knew there were other predictions around, but at that time I was not particularly interested in them, so didn’t search for these specifically.

In the meanwhile, I came across the NationalReview article “Beware the Boogeyman Alarm” by Kyle Smith and that contains this interesting paragraph (my emphasis):

The glaciers in Glacier National Park have been shrinking for more than 100 years (as the USGS points out, since 1900 “the mean annual temperature for GNP and the surrounding region has increased [by] 1.8 times the global mean increase”), so on current trends they’ll be gone someday “in the next few decades.” Who knows how long current trends will last, though? A 1923 Associated Press report said the glaciers would “almost disappear” in 25 years. So, gone by 1948. In 1936, the Arizona Republic reported that the glaciers would “vanish within 25 years.” So, 1961. A 1952 AP report alluded to “naturalists” who said the glaciers would be gone in 50 years. So, 2002. In 2009, National Geographic News asked, “No More Glaciers in Glacier National Park by 2020?” A New York Times report a few years ago pushed the date back to 2044.

That is quite an array of predictions that I didn’t look at before. Unfortunately, no links were provided. Initially, I assumed that it would be difficult to trace back a 1923 article, but searched anyway. I didn’t find the AP article, but I did find a news paper article from 1923 that refereced Associated Press. It is publiced on Saturday December 29, 1923 in the Medford Mail Tribune (Medford, Oregon) on page 5. The scan of that page doesn’t seem to be freely available, but an OCR text is (my emphasis):

Glacier Park Melting at a Rapid Rate in Scientist’s Opinion

CINCINNATI, Dec. 29. – (By the Associated Press) – The hot dry seasons of the past few years have caused rapid disintegration of glaciers in the Glacier National Park, Montana, professor W. G. Waterman of Northwestern university declared in an address today before the Geological section of the American Association for the Advancement of Science.
Sperry Glacier, studied by Professor Waterman, has lost one-quarter, or perhaps one-third of its ice in the past 18 years, he said. If this rapid retreat should continue, the professor added, the glacier would almost disappear in another 25 years, but he expressed the opinion that the long dry seasons of the past few years is over with probabilities of a lessening in the retreat.

Prof. Waterman studied the Sperry glacier and observed that ¼ to ⅓ of that glacier disappeared in the previous 18 years (that means that his first datapoint is somewhere around 1905). He then made the projection that if that melt rate would continues, then the Sperry glacier would almost disappear in 25 years (by 1948).

From the use of “rapid integration of glaciers“, I could deduce that it was not the only glacier melting, but other glaciers as well.

The Arizona Republic was also quick to find. The article was published Thursday, September 17, 1936 in the Arizona Republic from Phoenix on page 16. Same here, the scanned image is not freely available, but the OCR text is. It is a Q&A and this is the question with the answer (my emphasis):

Q. Will the glaciers in Glacier National park eventually disappear? J. W.
A. Dr. F. E. Matthes of the United States Geological Survey estimates that at the present rate of regression the glaciers will vanish within 25 years.

This is similar to the 1923 projection by Prof. Waterman. If the then rate would continue, the glaciers (plural) would be gone. No “almost” this time, but totally. So, thirteen years later, we again get a 25 years deadline (1961). Depending on what was meant by “almost”, it seems that the rate went down (if it was the same rate, then the glaciers would be “almost” gone).

Then it gets more interesting. Now we get a reference to an “AP report” of sixteen years later. I didn’t find the “report” itself, but it was referenced in the The Post-Standard from Syracuse (New York) on Wednesday March 5 – 1952 on page 1. This is the OCR text (my emphasis):

WEST GLACIER, Mont. (AP) – Montana’s Glacier Park may have to start looking for a new name. Naturalists say that 50 years from now it ‘ll be glacierless unless there’s a big change in Montana climate. The giant glaciers which gave the park its name are slowly melting away. Some are gone already. Every winter blizards shriek and swirl around the mountain peaks and replenish the glaciers with new snow, but summer’s hot sun take away more than winter adds.

Fifty years from 1952 is 2002. The next projection from the NationalReview article is 2009, but before that there was another projection made in 2003 that the author seemed to have overlooked and which was the subject of the previous post in this series. It is the 2003 paper titled Modeled Climate-Induced Glacier Change in Glacier National Park, 1850–2100 by Myrna H. P. Hall and Daniel B. Fagre. They used a mathematical model and it spitted out the 2030 end date:

We determined the melt rate and spatial distribution of glaciers under two possible future climate scenarios, one based on carbon dioxide–induced global warming and the other on a linear temperature extrapolation. Under the former scenario, all glaciers in the basin will disappear by the year 2030, despite predicted increases in precipitation;

Now, if the melt rate slowed already down in the 1950s and the 2003 model comes up with a data that is almost 30 years into the future, then this tells us that the rate again went down considerably. Otherwise, if the trend would have continued, then the glaciers would already be gone by that time.

Then we continue with the list of the NationalReview article. The 2009 article in National Geographic is one of the first links that I encountered in my search for information on the melting of the glaciers in Glacier National Park and I got a 404 error when I visited that site. I however know that this 2020 end date was a revision of the result of the model run in the 2003 paper by Daniel Fagre. It was widely reported in media other than National Geographic, for example at ThinkProgress (my emphasis):

[I welcome your ideas for a new name for the park. The pictures below are Grinnell Glacier circa 1940, top, and 2004, bottom.]

That first sentence sounds familiar. Just as in the 1952 article, also the ThinkProgress article from 2009 started by making the claim that Glacier National Park may have to start looking for a new name. Which is equally wrong, the name of the park comes from the glaciers 12,000 to 130,000 that sculpted the landscape, so in principle, no name has to be changed, even if all current glaciers would vanish.

The reference to the New York Times article was also quickly found. It is titled “Climate Change Threatens to Strip the Identity of Glacier National Park” and this is the projection at the start of the article (my emphasis):

A century ago, this sweep of mountains on the Canadian border boasted some 150 ice sheets, many of them scores of feet thick, plastered across summits and tucked into rocky fissures high above parabolic valleys. Today, perhaps 25 survive.

That is the weakest projection of them all. It is also not clear who made this claim exactly and when. The article seems to be an interview of Daniel Fagre, so it could well be him, but it also could be the interpretation of the journalist. If Fagre made this prediction, then that is very interesting. He then flip-flopped from 2030 (in 2003) to 2020 (in 2009) and ending in 2044 a few years later (in 2014).

Worldwide glacier recession is well documented (1,2) and varied model projections suggest that certain studied GNP glaciers will disappear in the next few decades, between 2030 (3) to 2080 (4).

Under the most probable temperature increase based on downscaled OA-GCM output for the IPCC A1B scenario, we conservatively estimate the glacier persisting through at least 2080

Interesting, Brown investigated the Sperry glacier and that brings us full circle: the first projection from 1923 was also about this glacier. Remember, in that projection, the Sperry glacier would be “almost gone in 25 years time” (1948). In hindsight, it survived the entire 20th century and is now projected to be gone at the end of the 21th century. There is almost 160 years between the first prediction and the end date of the latest paper…

This is how it looks like when I add all projections in one graph: 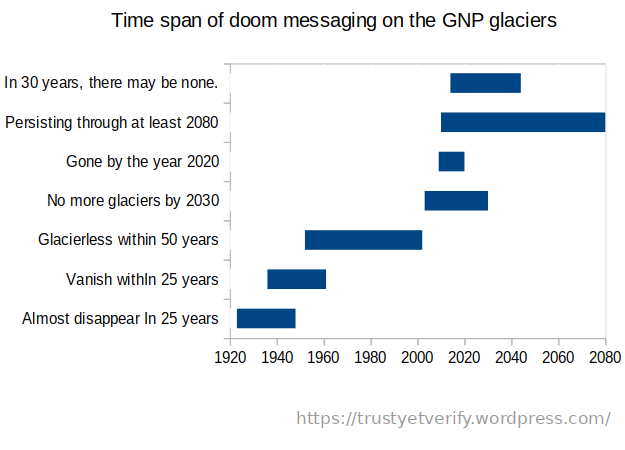 There are no gaps in the 157 years period. When one projection passed the deadline, another one was issued or there was already at least one in place. That is 157 years of solid doom mongering…

Don’t get me wrong, the glaciers in Glacier National Park are melting, there is no doubt about that. They lost significant amounts of ice since the first projections. The question however is what is the cause? Also, how is the melt communicated to the public?

The glaciers of Glacier National Park were already melting for a very long time. The news paper clippings suggest from at least the beginning of the 20th century and from the Hall & Fagre paper we know that the melting started even earlier (half of the 19th century, at the end of the Little Ice Age).

These glaciers were already on death row before humans were putting substantial amounts of CO2 in the atmosphere.

The botched predictions also show that the science behind the melting is highly uncertain, although that is not how it is communicated. For example, the ThinkProgress article used the revised projection of Daniel Fagre as evidence that it was worse than thought:

Yet another climate impact occurring faster than the models had projected.

Therefor suggesting that the melting was a sign of the climate impact of our emissions. In hindsight, it was in fact evidence that the projection was worse than the journalist thought.

That the climate impact is occurring faster than the models projected is a matter of opinion, yet it was presented to the public as a matter of fact.

The reason why they get away with this is because they tend to focus on the latest projection, losing sight of what came before. If any of the predictions of 1923, 1936, 1952 or 2009 were remotely true (meaning that it really was worse than thought), then there would not have been any glacier left in Glacier National Park. The fact that these glaciers survived the projections over the past 100 years actually means that until now it was better than thought, but that is not really a compelling message to bring.