In the process of looking for information for use in previous posts, I came along the website of PBL (Environmental Assessment Agency of the Netherlands). An interesting page was: Trends in global CO2 emissions: 2013 report (with the 2012 data). This is how it starts:

Actual global emissions of carbon dioxide (CO2) reached a new record of 34.5 billion tonnes in 2012. Yet, the increase in global CO2 emissions in that year slowed down to 1.1% (or 1.4%, not accounting the extra day in the leap year), which was less than half the average annual increase of 2.9% over the last decade. This development signals a shift towards less fossil-fuel-intensive activities, more use of renewable energy and increased energy saving.

There is also an interactive presentation “Trends in global CO2“ that explains it a bit more. More specifically in the slide with the title “Are there signs of change?”. It depicts a field of solar panels to take the message even more home. Below that picture a chart of the share of renewables, low-carbon energy and fossil fuels. First the situation of 1990: 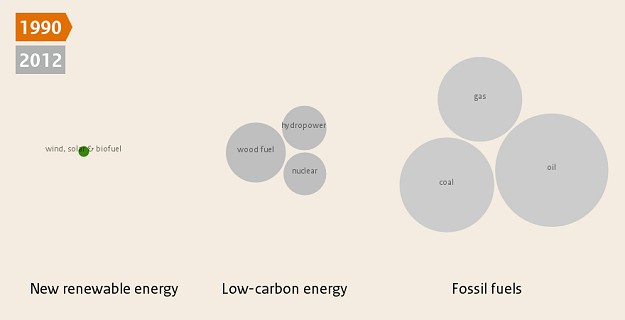 One could click the 2012 button and then one would see the situation in 2012: 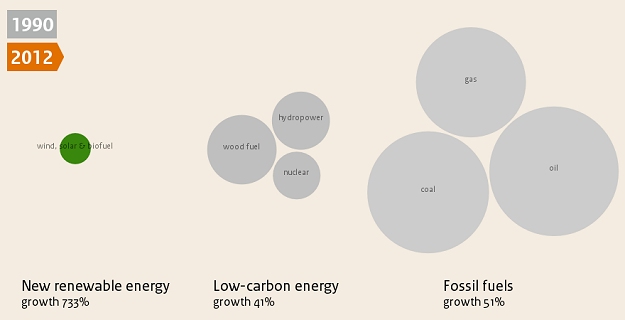 According to the footer there is a 733% growth of renewables, a 41% growth of low-carbon energy and a 51% growth of fossil fuels. On its own, this looks very impressive. But it is also important how big the share was before that growth. Renewables hardly made a dent in 1990. 733% growth of something that was insignificant is still tiny. The fossil fuel circles are much bigger so even the modest increase of 51% will displace much, much more than the skyrocketing 733% increase of the renewables. When we make the difference of the 2012 values compared to the 1990 values we get following increases per group: 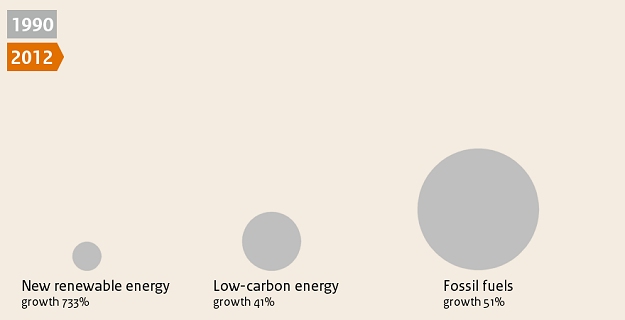 Do we really have to believe that this increase in the share of renewables (which is dwarfed by the increase of the fossil fuels) is actually significantly helping in slowing down emissions???