Today is the 11 year anniversary of a four minute, super alarmist, clip called the The Big Ask (Dutch ahead). It was produced as an incentive for our politicians to “act now” on climate change. Central point of the clip is the tipping point when reaching a 2°C temperature increase threshold (translated from Dutch, my emphasis): 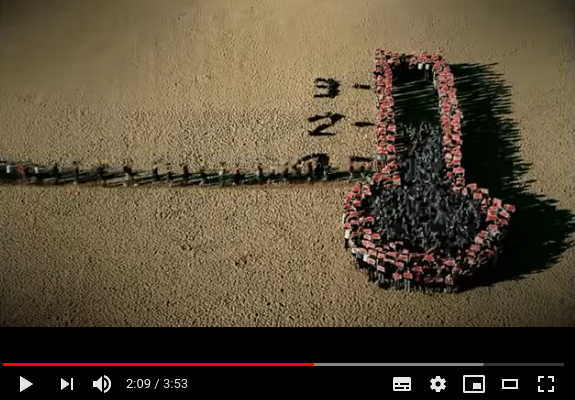 If the temperature keeps rising, two degrees warmer at a certain moment, then it happens: then the planet starts to warm itself up, faster and faster and faster. That’s what they call the tipping point. Then we can not do anything anymore. Then it is totally out of our hands, say the professors. But they also say this: we now have between four and ten years to ensure that we do not reach that turning point.

The mathematically gifted among us will be able to confirm that 2008 + 10 = 2018, bringing the deadline that the problem could be fixed to (November) 2018. Meaning, already behind us.

The director of that clip appeared in a current affairs program of December 16, 2018, just beyond that deadline and, remarkably, this is what he said about the tipping point (translated from Dutch):

I will give it a try to explain that 1.5 degree. We are now at a 1 degree warming. They [the scientists of the IPCC SR15 report] say that you get this at 1.5 degree.

[puts his coffee mug on the edge of the table, half of it still on the table]

Then you are somewhere at a tipping point, after which actually everything we see happening in the climate will be irrevocably unrecoverable. So now we have, between that 1 degree warming and that 1.5 degree -where we will go anyway- still a small margin to choose which future we want. Then, if we don’t do that -and right now we’re not doing that and that is also not addressed in Katowice- then this will happen.

[pushes his mug over the edge of the table] 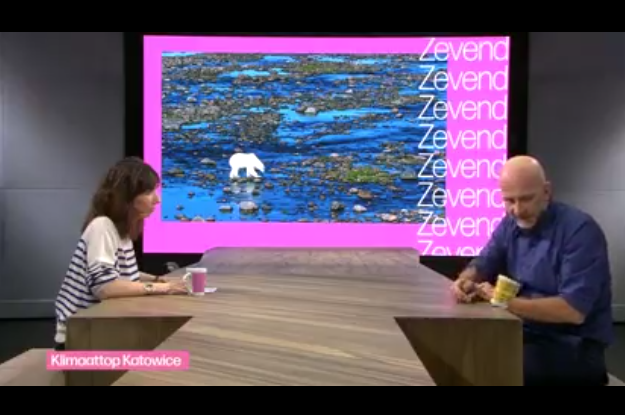 Then we are over the edge and we can’t go back. You can’t really continue to negotiate with the Earth.

No peep about his previous 2 °C claim. If I understand that correctly, the tipping point is now 1.5 °C…

This is what he later said in the interview (translated from Dutch, my emphasis):

With the promises that are made in Paris, we are going for three degrees of warming. That is, that cup is lying there and will not return.

That reminds me of the 100 months campaign of Andrew Simms (see this earlier post). He “calculated” that 100 months from 2008 we will reach a concentration of greenhouse gases at which it is no longer likely that we will stay below the 2 °C temperature rise threshold and we could reach a tipping point for the beginnings of runaway climate change. When that deadline past, Simms didn’t report on the prediction anymore, but started a new campaign centered on a new target of … 1.5 °C (although it was abundantly clear that we failed to reached 2 °C threshold in the first place).
Another similarity: the 100 months campaign started around the same time of the recording of the The Big Ask video (August 2008). Something happened at that time that triggered such 8 to 10 years claims back then?

Balthazar was smart enough to not state a new time frame in order to fix the 1.5 °C tipping point in the interview. Fast forward to the beginning of last week when he was invited as a guest at the talk show “De Afspraak” (“The Appointment”) on, among others, the subject of a survey gauging the position of the Flemish people on climate change. He then made the following curious claims (translated from Dutch):

And science says, once again: we have about ten years to solve this. Within 10 years, according to the IPCC, we must reduce the rate by 50%, in a report that was clearer than ever, 50% reduction of our emissions worldwide.

And later he repeats that new ten year deadline (translated from Dutch):

Alas, these are the facts of the IPCC, already thirty years, all scientists there say: we have about ten years before we get into an irreversible situation. And then it is easy to say that we don’t have to scare the people that it will be over in twenty years. Sorry, but that is how it is.

Meaning that we reach the threshold in ten years and it will be over in twenty years. That sound ominous in this conversation, but it is a bit ridiculous when we look at his earlier claim. If we were not able to fix the 2 °C threshold within the previous ten years, then how on Earth is it possible that we now have yet another ten years to fix a much more strict 1.5 °C threshold?

Although that type of logic goes beyond my comprehension, it is comforting though. We don’t have to worry much about missing a ten years deadline, there will be yet another ten years after that…

1 thought on “(Another) ten years to prevent disaster?”